Walcott keen to stay at Arsenal 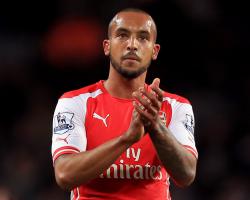 Walcott, who joined the north London club in 2006 when he was 16-years-old, believes Arsene Wenger's side could be on the verge of something special after his goal helped them secure back-to-back FA Cup triumphs in May.

The 26-year-old, who last penned a three-and-a-half-year deal 18 months ago, is planning to just focus on his football and getting a full pre-season under his belt.

"My agent has talked to the club, I enjoy playing for this club so I am just letting them crack on with things and I'll continue playing football," Walcott told several national newspapers.

This squad, for me, is one of the best I've been involved in

I want to be part of that."

When asked if he would be happy to let any talks carry on beyond the start of the new campaign, he said: "Definitely

It's not in my thought process at all

You don't want to dwell on it, you want to play well and if it happens it happens.

I can't let that affect me, I want to do well for this club."

Walcott was speaking after he scored the opening goal in Arsenal's impressive 3-1 win over Everton to clinch the Barclays Asia Trophy in Singapore on Saturday.

The Gunners were highly impressive throughout the contest and Walcott knows how important it will be for them to hit the ground running.

"It's my first pre-season for two years now so I want to work hard and get fit," he added

I'm always going to be judged on goals, I've been very happy with my goal record when given the opportunity