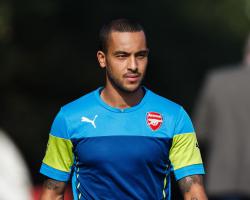 The 25-year-old has been sidelined for nine months after rupturing the anterior cruciate ligament in his left knee during the closing stages of the Gunners' FA Cup third-round victory over Tottenham.

"It has been a hard, long nine months," Walcott told Sky Sports News after featuring for the first half of Friday night's goalless draw at Meadow Park.

That's what I did tonight, and I got through fine."

Walcott ruled out playing for the Gunners this weekend against Hull and was adamant he would not rush a return to first-team action.

"It was a massive blow when it happened, but I am focused on the present now and I will take it day by day," he said.

"I need to be patient with myself

It is important to recover

I need to be patient

The manager will choose to play me when he wants - it (the injury) needs to be managed as well.

Abou Diaby also played 67 minutes and Serge Gnabry an hour for the Gunners.