Walcott on target as Arsenal win 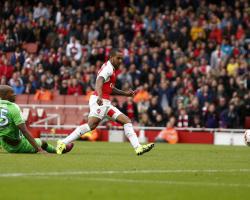 England international Walcott has reportedly agreed a new contract with the Gunners and the 26-year-old hit the winner in a low-key 1-0 victory despite lacking a cutting edge in the first half.

Having hammered Lyon 6-0 24 hours earlier, Arsenal were favourites to win their own friendly competition even though Villarreal had made it two wins out of two in the day's first match, also beating the Ligue 1 side 2-0.

Cech, who left the Blues to join Arsenal, should have been tested inside the opening 15 minutes when the returning Nicklas Bendtner was picked out by Kevin De Bruyne.

The former Gunners striker has not enjoyed a prolific start to his career at Wolfsburg and looked anything but clinical as he could only shin the ball away as he looked to bring De Bruyne's cross under control.

The visitors continued to press and came close when Christian Trasch's low shot was deflected behind by Nacho Monreal before Walcott, deployed in his preferred position as a central striker, had Arsenal's best chance of the opening exchanges when he was played in by Ozil and forced a smart stop from Diego Benaglio.

But the England international looked rusty as he struggled to a control a through-ball when in on goal shortly afterwards and, when he did have the ball in the net after 33 minutes, his lofted effort was correctly chalked off for offside.

Ozil was having a much quieter afternoon but almost steered Monreal's low cross past Benaglio as the first half drew to a close, with neither side having crafted a clear-cut chance to open the scoring.

The German World Cup winner was replaced at the break by Chuba Akpom, whose arrival saw Walcott repositioned on the right flank.

Despite his shift, Walcott was the man to open the scoring five minutes into the second half as he picked up Jeff Reine-Adelaide's slide-rule pass and finished coolly to put Arsenal ahead.

De Bruyne fired high and wide as the visitors looked to respond, with Ricardo Rodriguez stinging the palms of Cech on the hour mark.

Cech was again on hand to push Josuha Guilavogui's drilled effort behind for a corner as every touch for the Czech Republic international was met with cheers from the home fans.

Wenger introduced Aaron Ramsey and Alex Oxlade-Chamberlain from the bench but it was fellow substitute Akpom who forced a save out of Benaglio as Arsenal looked to kill the game off - but Walcott's goal proved to be enough for the Gunners.