Walcott out of World Cup 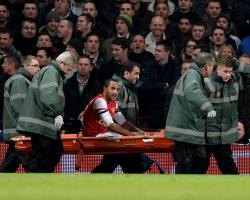 The Gunners confirmed on their official website that Walcott is likely to be out for at least six months as a result of the problem sustained in the 2-0 FA Cup third-round win over Tottenham at the weekend.

Walcott was taken from the field on a stretcher - and was subsequently pelted with objects thrown from the away end - after appearing to jar his knee when making a tackle during the closing stages of the encounter although the injury has turned out to be more severe.

The 24-year-old did not appear to be in severe pain as he was carried off the field at the Emirates Stadium on Saturday and even signalled "2-0" in the direction of 5,000-strong Tottenham fans, as missiles, including coins and plastic bottles, were seen to hit medical staff as they carried the stretcher around to the tunnel on the halfway line.

Walcott learned on Monday that he would face no disciplinary action for his hand gesture, but the latest news is much more devastating.

"After coming off injured in Saturday's 2-0 win against Tottenham Hotspur, the club regrettably announces that Theo Walcott has sustained a ruptured anterior cruciate ligament of his left knee," said the statement on the club's official website, arsenal.com.

"Theo will have surgery in London in the near future and is expected to be out for at least six months, therefore missing the remainder of the season and the World Cup in Brazil in the summer."