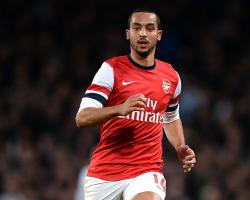 The Gunners confirmed on Monday evening tests had revealed the 24-year-old had damaged the anterior cruciate ligament in his left knee during the closing stages of Saturday's FA Cup win over Tottenham and, after surgery, he will need at least six months of rehabilitation.

Initially it had been hoped Walcott, who had scored five goals since returning from a stomach muscle injury earlier in the season, would only be out for a matter of weeks after appearing to jar his knee when making a defensive tackle.

Indeed, the forward did not appear to be in severe pain as he was carried off the field and even signalled '2-0' in the direction of the 5,000-strong Spurs fans, while missiles - including coins and plastic bottles - were seen to hit medical staff as they lifted the stretcher around to the tunnel on the halfway line.

However, following further tests and specialist examination, the club's worst fears were confirmed just a few hours after the Football Association decided the player would face no disciplinary action for his hand gesture.

"The club regrettably announces that Theo Walcott has sustained a ruptured anterior cruciate ligament of his left knee," Arsenal said in a statement.

"Theo will have surgery in London in the near future and is expected to be out for at least six months, therefore missing the remainder of the season and the World Cup in Brazil in the summer.

"Everyone at Arsenal wishes Theo a speedy recovery and we look forward to seeing him back on a football pitch as soon as possible."

The full diagnosis of Walcott's knee problem is now likely to have a knock-on impact to Wenger's plans on how best to bolster his squad during the January window in an attempt to last the distance in the battle for honours.

The attacking options of the Barclay Premier League leaders were already depleted, given Nicklas Bendtner is expected to miss all of January with the ankle problem he picked up while scoring a late goal in the 2-0 win over Cardiff on New Year's Day, while France Under-21 forward Yaya Sanogo is also way short of match sharpness.

Wenger, though, concedes a big-money signing during January can be notoriously difficult to push through.

A move for Dimitar Berbatov was last week played down, but the Fulham forward would appear to fit the bill in terms of price tag and experience, while 21-year-old Alvaro Morata of Real Madrid could prove a stop-gap loan option.

Walcott, meanwhile, is now set to miss what could have been a third opportunity to represent England at the World Cup finals.

The former Southampton forward is yet to play in a World Cup match, having been a shock selection as a raw talent in Sven-Goran Eriksson's 2006 squad for Germany, while his omission by Fabio Capello four years later was equally surprising.

Arsenal team-mate Aaron Ramsey - who recovered from a double leg break in 2010 - was quick to offer support to his friend.

The Wales midfielder wrote on Twitter: "Gutted for Theo, he'll come back stronger after this. Been fantastic for us so far this season. Have a speedy recovery mate."

Following their hectic festive schedule, Arsenal now have an extended break until the next Barclays Premier League match, when they travel to Aston Villa on Monday 13 January.

Wenger has been impressed with the resilience of his squad.

"You feel the spirit is there to fight together," he said.

"You can put any player anywhere, they just fight for each other and that is just the greatest ingredient of positiveness we have in the squad."

Elsewhere, the FA has digested the full match report of referee Mark Clattenburg following a fiery end to the north London derby and will also speak to other relevant bodies as well both clubs in a quest to single out any offenders - with a warning of life-time bans for those found guilty.