Walcott- Title tilt a must 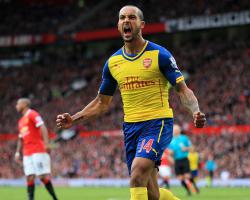 Arsenal all but secured third place in the Barclays Premier League on Sunday when they drew 1-1 at Manchester United.

The Gunners have had to go through the preliminary stages of the Champions League for three of the last four years, but barring two big losses against Sunderland and West Brom, they will go directly into the group stages next season.

Walcott believes Arsenal are punching below their weight, though

He was disappointed that Arsenal did not pose a challenge to Chelsea until the spring.

Next season has to be a different story, the Arsenal winger insists.

"Third place is a step forward from where we finished last year," Walcott said.

"But we want to - and need to - be pushing on now and trying to challenge for the title.

"There was an opportunity in the season when we were getting close to Chelsea and people were talking about us competing but I sensed throughout the dressing room that we were never quite up there with Chelsea.

"But looking at the squad, the manager has an absolute headache to try and pick his best team and we want that going into next season.

"We are looking very strong and you never know, he might add a few extra players but we need to be pushing for the Premier League now

There is no excuse."

Walcott came off the bench in the 72nd minute and 10 minutes later he helped put Arsenal ahead.

The 26-year-old fired a low ball across the box which clipped Tyler Blackett's leg and flew past Victor Valdes to snatch a point for the Londoners, who performed poorly in the first half.

"It's my goal if you are going to ask," Walcott said with a smile.

"You've got claim any one you can.

"I didn't see anyone in the box so I just shot and luckily for me it hit Blackett and went in."

Sunday was the fifth successive game that Walcott came off the bench for the Gunners.

The England winger has not been able to hold down a place in the Arsenal first team since he recovered from a serious knee injury which kept him out of last year's FA Cup final.

He hopes to push his case for a start in this year's final against Aston Villa over the course of the next week.

"Of course (it has been frustrating)," Walcott said.

"Any player wants to play

I want to play

I have been out for a long time

The manager was patient, I have been patient myself.

But when given the opportunity, I need to be ready and focused at all times because it is not just about the starting line-up, it is about the whole squad.

I have been training very well and that's the best I can do to impress the manager.

"When given the opportunity in a big game and a massive arena like Old Trafford, it is not going to do you any harm."

Walcott's future has been the source of much speculation recently

The former Southampton man's contract runs out at the end of next season and he has been linked with a move to Liverpool.

He refused to discuss the matter after the final whistle at Old Trafford though.

"No I can't give you an update on the contract situation

I just want to continue playing my football and we will see where it takes me at the end of the season," he said.

Arsenal's opponents for the pre-season Emirates Cup tournament this year will be Lyon, Wolfsburg and Villarreal

Arsenal will take on the French side on Saturday, July 25 before facing the Bundesliga outfit the following day