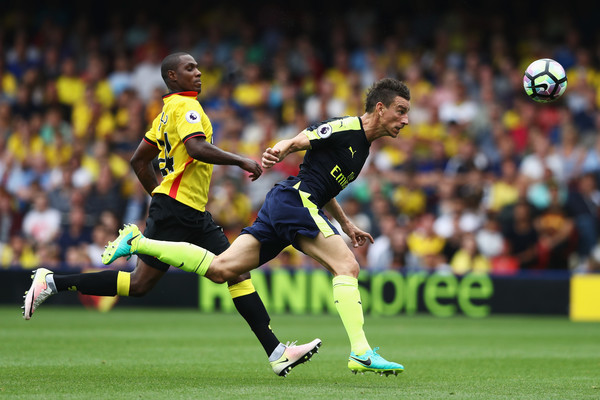 Three up at half time, and playing well. this was what the fans wanted.

A Cazorla penalty, a scruffy Sanchez goal, and a top class header from Ozil put us in charge at half time, but the second half was a different story.

Watford had much more possession and pulled a goal back - were we going to have the usual nail-biting Arsenal style last few minutes? - not really. It finished 3-1 and the travelling Gooners went home happy, buoyed by the news of the arrival of Mustafi and Perez.

Time to kick into gear.

Arsenal's season sprung into life as they recorded their first Premier League win of the season with a 3-1 victory at Watford.

Having lost at home to Liverpool and drawn 0-0 at champions Leicester, Arsene Wenger saw his side dominate the first half at Vicarage Road, as an early Santi Cazorla penalty was added to by Alexis Sanchez and Mesut Ozil.

Watford, still looking for a win under Walter Mazzarri, looked better after the break as club-record signing Roberto Pereyra came off the bench to grab a consolation.

The Gunners, who are likely to add defender Shkodran Mustafi and forward Lucas Perez to their ranks in the coming days, were ahead in the ninth minute after Nordin Amrabat crashed into the back of Sanchez and, after a delay, referee Kevin Friend pointed to the spot.

Where Theo Walcott had failed on the opening day, Cazorla made no mistake, stroking his penalty down the middle as Heurelho Gomes dived to his left.

Walcott came close to adding a second as he latched onto Cazorla's low cross but Gomes was on hand to save with his feet.

And Watford were almost level moments later as Amrabat skipped past Nacho Monreal before his cross was turned towards his own goalkeeper by Laurent Koscielny, but Petr Cech shown fine reactions to push the ball clear.

The hosts were starting to create more and defender Christian Kabasele almost marked his Premier League debut with a goal but could only glance Etienne Capoue's corner wide of the post.

Sanchez was denied by a smart Gomes save at his near post as the game opened up but the all-important second goal would come Arsenal's way courtesy of a contentious throw-in decision.

Amrabat appeared to have won Watford a throw-in deep in Arsenal territory only for the decision to go the way of the visitors.

Arsenal burst up-field through Sanchez, who then scuffed home Walcott's cross, with goal-line technology confirming he had doubled the Gunners' lead.

Walcott was impressing from the right flank and only another great save from Gomes prevented the England man driving Arsenal further ahead - but it was only a short respite.

From the next attack, Sanchez delivered an inch-perfect cross which has headed home by Ozil, enjoying a busy return to the side having been given an extended rest following the European Championship.

Mazzarri responded by introducing Pereyra at the interval and he marked his debut with a well-taken goal 10 minutes into the second half, stealing in ahead of the impressive Granit Xhaka to bend a strike past Cech and reduce the arrears.

Arsenal were still looking dangerous in attack but Watford were much more potent now, Cech forced into a smart double-save to deny Jose Holebas and Odion Ighalo before the latter saw an acrobatic overhead kick fly inches over the crossbar.

That was as close as the hosts came to getting a foothold in the contest and it was Arsenal left celebrating a first three-point haul of the campaign.