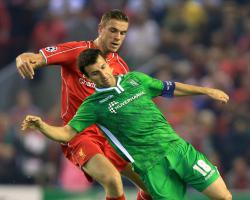 Dyakov will lead his side out at the Emirates Stadium on Wednesday night for the first part of their Champions League double-header against an in-form Arsenal.

The Bulgaria international was in the Ludogorets side which lost 2-1 to Liverpool courtesy of a last-gasp Steven Gerrard penalty when they last played in England back in 2014.

And Dyakov reckons they can cause a shock against Arsenal having not been drawn on their weaknesses, even if he feels Arsene Wenger's side are among the world's elite.

"It is a unique stadium and every player dreams to play here," he said on the eve of the contest.

"Arsenal is one of the teams which are playing some of the best football in the world, they can play their style of game against Barcelona or anybody, there is a lot of movement, a lot of passing the ball

It will be a pleasure to play here against them.

"Teams like Arsenal have very few weak spots, our coach has given us the information and I can't disclose it

If we have some luck and play well, we can expect something from the game."

Wenger has been in charge of Arsenal for longer than Ludogorets have existed as a professional football club - with the Frenchman celebrating 20 years at the helm at the start of October.

Ludogorets formed in 2001 and have since climbed to the top of the Bulgarian league with the backing of Sofia-born businessman Kiril Domuschiev.

Current manager Georgi Dermendzhiev has challenged his side to take the game to their Group A opponents and come away with a better result than the 3-1 loss they suffered at home to Paris St Germain last time out.

"We would like not to repeat that game," he said.

It was a very good match for us.

"Arsenal is a very good team, I personally respect the manager Arsene Wenger, 20 years his name is connected with Arsenal and he has achieved everything with this team

We are going to come out and play like we have in the other games we have had."