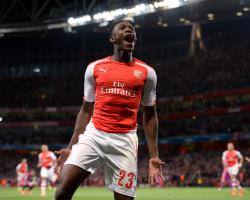 Welbeck had made a tentative start to life with the Gunners following his ÃÂ£16 million ($25 million) move from Manchester United on transfer deadline day last month.

Van Gaal claimed Welbeck wouldn't make it at the highest level, a damning comment which earned widespread agreement from critics who said he would never be a natural goalscorer.

Welbeck had hardly silenced the naysayers after scoring just once in his first four appearances for Arsenal, with several good chances squandered in the process.

But he picked the perfect moment to hit form as the first treble of his career inspired a crucial 4-1 victory over Turkish side at the Emirates Stadium on Wednesday.

Each finish was more confident than the last and Wenger believes Welbeck's predatory display will make him believe he can shine in an Arsenal shirt after being used either out of position or as a substitute for much of his time at United.

It's nice to see the potential is there and hopefully the hat-trick will help him gain confidence," Wenger said.

"It helps always to know you are given the chance to play in the next game.

His work rate is good and his attitude is positive

He is a team player not just a finisher

He wants to help the team.

"He's a good finisher, technically he is very sound

He is a good passer of the ball

He is so fast, he can be electric."

Welbeck was delighted to live up to Wenger's billing and he said: "He's shown a lot of faith in me and I'm delighted to pay him back tonight.

"Just giving me the chance to play up front in my preferred position, I'm going to do everything I can to make sure that he's happy."

After winning only one of their previous six matches in all competitions -- a frustrating run that included a 2-0 defeat at Borussia Dortmund in their opening Champions League Group D fixture -- this was a much-needed morale boost for the rest of Wenger's team, who marked the 18th anniversary of their manager's appointment with their most swaggering display of the season.

"We had a good start

They were surprised by our pace," Wenger said.

"We had good transition from defence to attack and Welbeck got on the end of some good movements."

Wenger knows much tougher tests await -- starting with a trip to Premier League leaders Chelsea on Sunday -- but for now he preferred to bask in the afterglow of a victory that was the perfect way to celebrate his anniversary.

"Let's not talk about Chelsea tonight," he said.

That's not bad either!"

"It is all my responsibility," Prandelli said

"It wasn't a great performance

Unfortunately the defenders played a bit wider than I expected and Melo had to play one against one.

"We will find a system the players believe in

Sometimes the messages I give might not go through to the team, but I believe we have very good players and we should be able to show our qualities."