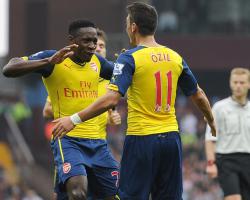 The ÃÂ£16million striker bagged his first goal for the club in their 3-0 win at Aston Villa on Saturday.

Villa's bright start was wiped out in just over three first-half minutes as Mesut Ozil and Welbeck scored before Aly Cissokho's own goal.

Welbeck set up Ozil's opener for the German's first goal of the season as he answered the critics who had called for him to be dropped.

The World Cup winner had been lambasted for his performance in the 2-0 Champions League defeat at Borussia Dortmund last week.

But he also teed up Welbeck and the 23-year-old believes now he has settled at the Emirates Stadium he will only improve.

In time I'm sure the understanding will be positive," the former Manchester United star told the club's official site.

"It was a good team performance and we started really well

We moved the ball and got in behind them at times - that was the difference.

"We knew facing Aston Villa would be difficult

There's never an easy game in the Premier League

Once we took our first goal we looked in control of the game."

The Gunners were untroubled once they had raced into the lead and boss Arsene Wenger was delighted with Ozil and Welbeck's contribution.

"In the second half it was a possession game, a controlled game, because they didn't come out too much," he said.

"Overall it's still a convincing win where Welbeck and Ozil scored and that's important as well."