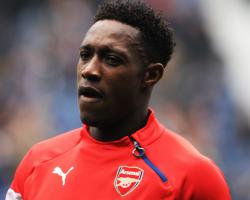 The Gunners ended the Barclays Premier League campaign with a 4-1 win over West Brom at the Emirates Stadium on Sunday, where Theo Walcott netted a hat-trick.

While Walcott strengthened his claim for retaining his place in the starting XI against Aston Villa at Wembley on May 30, and midfielder Alex Oxlade-Chamberlain's late substitute appearance renewed his hopes of being involved, Wenger confirmed Welbeck's knee problem was likely to rule him out next weekend.

Asked by Press Association Sport whether he thought the 24-year-old could be fit for the FA Cup final, Wenger said: "Welbeck will be short because he has not practised yet."

Captain Mikel Arteta, though, may yet return to the squad for the first time since the end of November following calf and then ankle problems.

"Arteta is a possibility, because he is back in full training," Wenger added, with defender Mathieu Debuchy another holding a chance to be involved after a hamstring injury.

Walcott, meanwhile, hopes his sharp display in completing a first-half treble against the shell-shocked Baggies will boost his chances of starting at Wembley, having missed last season's final victory over Hull.

He said on Arsenal Player: "I just want to play football and getting a hat-trick on the last day of the season after having limited opportunities, it was just nice to go out there to show what I can do

Hopefully the fans were very happy with that."

Walcott, who has yet to commit his long-term future to the club as talks continue over a new deal, believes Arsenal can end the campaign in style.

He added: "There is a good sense of belief in this team, we can take it into the weekend and hopefully get another trophy.

"When it is free-flowing football, we are impossible to play against."

Wenger is confident Arsenal can continue their progress next season, having secured third place in the Premier League ahead of Manchester United, and so avoiding the need for a tense Champions League play-off in August.

"We hope that everyone comes back from international duty in good shape, after we will see if we can do something to strengthen the team," he said.

"We have to start strong and we can prepare for that well now because we have no qualifier for the Champions League.

"It is a massive difference

You go away and you can play in Turkey between two Premier League games at the start of the season, which is never easy."

Wenger added: "The ideal situation would be to start strong, stay strong and finish strong, that is what Chelsea did and that's why they won the championship, because they had a very strong start and even when they had a weaker period, they could grind some results out."

For West Brom, meanwhile, there are also plenty of reasons to be positive for 2015/2016.

Tony Pulis' squad have become a well-drilled outfit since his arrival in January.

Victory over Chelsea last Monday night made it a third win in an unbeaten five-match run which moved them comfortably away from trouble, finishing on 44 points in 13th place.

Midfielder Darren Fletcher, who joined from Manchester United at the end of the January transfer window, believes the Baggies can continue to develop.

"If you look back over the time I have been here and the manager has been here, it has been fantastic and a credit to everyone involved in the club," the 31-year-old Scot said.

"We have ended the season really well, but let's go and do it again next season, so we are not involved in fighting a relegation battle."