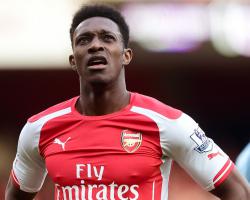 Gunners boss Arsene Wenger said the former Manchester United forward has no chance of being fit for the Wembley showpiece with Aston Villa and has been withdrawn from the England squad to face the Republic of Ireland on June 7 and Slovenia on June 14.

Wenger said: "Danny Welbeck will not be fit, not for us, nor for England.

"We called them yesterday, the FA, to explain that his bone bruising of the knee has not healed.

"I don't know what he will say, Roy (Hodgson), the England boss."