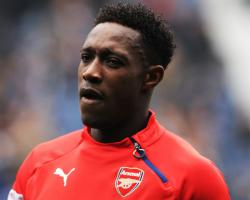 The 24-year-old was forced to sit out the closing weeks of the campaign following bruising on the bone around his knee, which saw him miss both the FA Cup final victory over Aston Villa at Wembley and the June internationals.

After mounting a successful defence of the famous old trophy, there is a growing feeling Arsene Wenger's squad can now go on to push Chelsea and Manchester City in the battle for a long-overdue serious assault on the championship.

"To miss the FA Cup final was obviously disappointing for me, but great for the club and the fans to retain the trophy

This is the first one I have won and hopefully there are going to be more in the future," said Welbeck, who was at the Emirates Stadium on Monday night for the launch of Puma's 2015-2016 Arsenal home kit

"We definitely want to push on as a club, with the players we have got there is no reason why we should not be up there challenging for the Premier League, it is something which is within our ambitions as a team.

"Our slow start at the beginning of the season cost us in May, and when we look back on the points we should have got, then we would have been right up there."

Welbeck, signed from Manchester United in a ÃÂ£16million deal on deadline day in September 2014, is relishing the challenge of pushing the likes of England team-mate Theo Walcott and French frontman Olivier Giroud in spearheading the Arsenal attack.

"Competition is healthy, it is good and gives the manager a selection headache, which is the best for the team for us to drive forwards and keep improving," said Welbeck, who was often deployed out wide during his closing spell at United.

"With the selection of players the manager has got now, you can use players in different styles and positions which is only going to help the squad going forwards.

"I am sure that when anyone is called upon, they are going to give 100% to try to stay in the team for the next game.

"Wherever you play on the pitch, whether it be the left, on the right or down the middle, you are going to give you best for the team.

"I know I definitely have more levels to go, and I am really looking forwards to doing that next season."

Welbeck remains confident his switch to London was the correct choice to further his career.

"Yes, it was big move, but the right move for me to do and the way it has all panned out, I am happy here at Arsenal," he said.

"It takes a while (to settle), sure, London is a much bigger city than Manchester, but it is easy though

I had quite a few boys from England here and they helped me settle in pretty well."

Despite the disappointment of the way his campaign ended, Welbeck - who joined his team-mates on their open-top bus parade around Islington - is determined to use the extended break to return ready for the new campaign, which kicks off in the FA Community Shield against Chelsea on August 2.

"The injury happened when I was just getting into gear with a run of games, then you are trying to work your way back to fitness and it is difficult," said Welbeck, who netted the winner in the FA Cup quarter-final victory at Old Trafford on March 9, which proved a last club goal.

"It was worse than we first thought it was but it is just a natural healing period and usually I heal faster than others.

"I can't really do much at the moment, with the bone bruising, but I am still going into see the physio for a couple of times a week and then will hopefully get a bit of time away."