Wenger aims to get Arsenal back on track 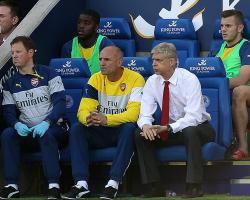 Wenger's side travel to Villa Park to face a Villa side who lie second in the Premier League with three wins from four matches following last weekend's surprise victory at Liverpool.

If they are to leave with three points, Arsenal will have to quickly shake off the disappointment of the 2-0 Champions League defeat at Borussia Dortmund that came three days after the Gunners had squandered a winning position in a 2-2 draw against Manchester City in the Premier League.

Arsenal's defensive weaknesses were exposed on both occasions, once again throwing focus on Wenger's failure to bring in a centre-back and defensive midfielder during the most recent transfer window.

The Dortmund defeat was the Gunners' first of the campaign -- although they have won just two of their seven competitive matches -- and the manner of the loss gave cause for concern.

Jack Wilshere conceded that the last two games had once again highlighted Arsenal's failure to succeed at the highest level and questioned whether they had adopted the right approach against the German side.

Wilshere picked up an ankle injury during the game to add to Wenger's worries although the manager has not given up hope of the England midfielder recovering in time to face Villa.

"It's difficult to say how bad it is

Normally it would be not too bad but I am a bit cautious because of his history (of ankle problems)," Wenger said.

The arrival of Danny Welbeck from Manchester United last week has failed to provide an immediate lift with the England forward guilty of missing good chances in both his appearances.

And the performance of Mesut Ozil was again placed under scrutiny after a largely ineffectual display by the Germany midfielder.

But the continuing good form of Aaron Ramsey has provided a bright spot and the midfielder, 23, claims his displays reflect his growing maturity.

"Now I feel like I am as mature as I can be," Ramsey said.

"I've got a lot more responsibility and I've become used to that and it feels good.

"I just want to improve on last season and try to become the best player I can possibly be.

"I'm really excited with the way things are developing and about what the future holds."

Aston Villa manager Paul Lambert is eager to sort new deals for Fabian Delph and Ron Vlaar, whose contracts both expire next year, after committing his own future to Aston Villa.

Lambert this week followed Gabriel Agbonlahor and Alan Hutton by agreeing a new long-term deal, signing on until 2018.

"That is the next thing on the agenda," said Lambert

"The two lads (Agbonlahor and Hutton) have signed which is great

If we can get the other lads tied up that is what we will try to do."

Lambert insisted it was an easy decision to commit to Villa just months after his own future had been up in the air after it emerged owner Randy Lerner wanted to sell the club.

It is totally unpredictable

The chairman has been great and he has been totally transparent," Lambert said.

Everything is really positive -- new contracts, the way we've started the league.

"We are going to keep building it and if you get stability into the club it really helps.

"If that day comes when someone wants to take it on and the deal is right, as long as it is going to make Villa stronger then he will do it."