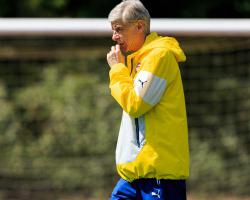 The Frenchman ended his nine-year trophy drought in last season's final with Hull and hopes Arsenal can complete a successful defence at Wembley.

Wenger is bidding to become the first manager in the post-War period to win six FA Cups, a feat matched by only George Ramsey, who won the last of his with Villa in 1920.

The 65-year-old insists personal glory is not his motivation and he does not even know where to find his previous winners' medals from a glory-laden 18-year career at Arsenal.

"I heard you so much telling me that we don't win anything that I'm quite surprised I am suddenly on the other side of it," said Wenger, whose position was under scrutiny last term.

"Honestly I don't look at it in a personal way

Maybe I will if we win.

"I am not a collection man

I am always focused on what's next."

Wenger, who first won the FA Cup in 1998, has big decisions to make in terms of team selection and next season.

He hopes England internationals Theo Walcott and Jack Wilshere play a big role, but was not prepared to confirm their places in his first-choice XI.

"You cannot explain to 10 players individually that they do not start," Wenger said.

"You have to make your decisions and the whole squad has to focus on doing it because most of the time the heroes are the guys who come on.

"I want Walcott to play through the middle and I want both of them to stay here.

"He has not played since November, Jack

That is five months, six months.

"We always stood by him in every difficult moment

Does that mean we want him to stay here for a longer period? Yes, we would like to benefit from his talent now.

He has been out for a year (with a knee injury)

You want them to stay."

Walcott, who scored a hat-trick in last weekend's Premier League-concluding defeat of West Brom, and Wenger are in agreement that the 26-year-old's future lies as a central striker.

"The quality of his runs and his finishing is top class," Wenger said.

"He can play on the flank, he can play through the middle

But I think in future he will play more through the middle."

Wenger will hope there is no "nightmare" start for Arsenal this time after last year conceding twice in the opening eight minutes before rallying against Hull.

"With the pressure on it was really a nightmare

(But) I was ready to fight until the end.

"We have learnt a lot from last season and let's show that on Saturday."