Wenger- Arsenal have the belief now 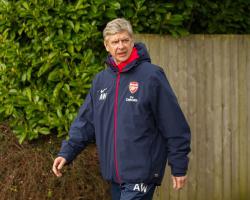 The Gunners last advanced to the Champions League quarter-finals in 2010 and lost to Bayern in the last 16 last year.

Wednesday's first leg against Bayern in the last 16 takes place 12 months to the day since a 3-1 home loss to the Germans which cost Wenger's men their place in the next round.

Once more Arsenal take on a side Wenger believes are the world's best - "at the moment you can't say the opposite (as) they win every game," he said - but this season on the back of an FA Cup victory over Liverpool, rather than a morale-sapping elimination to lower-league opposition.

"We are in much better mental shape today than we were one year ago," Wenger said.

This time we won against Liverpool.

"We have a strong team spirit, a strong desire to do well and a united team.

The belief is built by the results.

"On that front we are stronger, of course

We believe we can do it, but that's down to the quality of our performance tomorrow."

Arsenal's home loss gave them a gargantuan task heading to the Allianz Arena, where they won 2-0, exiting the competition on away goals and Bayern went on to lift the trophy at Wembley.

Under new boss Pep Guardiola, Bayern are cantering towards a successful Bundesliga title defence and hold a 16-point lead at the top of the standings.

Arsenal, meanwhile, are involved in one of the most competitive Premier Leagues in memory, with Chelsea, Manchester City and Liverpool all alongside them in title contention.

Wenger believes the fact his men are battle hardened, including in Europe where they advanced from a group which included Napoli and 2013 runners-up Borussia Dortmund, will serve them well against a Bayern team who have scored 16 goals without reply in their last four games.

"In every single game we have to be absolutely 100 per cent," Wenger added.

A solid start and defensive performance is essential for success, too, with Arsenal hoping to show they have learned from falling 2-0 down after 21 minutes last term.

Lukas Podolski pulled a goal back, but then Mario Mandzukic netted a third for Bayern to take a handsome advantage back to Bavaria.

Wenger said: "Every minute counts in a game of that stature

"We have built a home strength recently, because we don't give goals away

That will be certainly vitally important in this tie."

Midfielder Jack Wilshere added: "We were a bit nervous going into the game last year

We lost to Blackburn the game before.

"There was a lot of tension in the stadium and it was a big game.

"Once we calmed down a bit, we took the game to them a little bit.

"The third goal was a lucky goal and that killed us.

"This year we'll be intelligent going into the game

First of all we'll work on our defensive duty and then we'll play."

Wilshere has taken confidence from the win at Bayern and knows the margins of victory in the Champions League are small.

"We've spoken about the importance of staying in the game," the England midfielder added.

The away goal is massive in this competition."

Wilshere is poised to return to the starting XI after dropping to the bench against Liverpool due to a stiff back.

Mikel Arteta is suspended, with Tomas Rosicky replacing him in the matchday squad, while goalkeeper Wojciech Szczesny, Santi Cazorla, Kieran Gibbs, Bacary Sagna and Olivier Giroud are all in line to be recalled.

Wilshere believes Arsenal's unity will shine through as Arsenal's quest for a first trophy since the 2005 FA Cup goes on.

"It's been a long time since we won a trophy, but we showed this season in games when we didn't play our best but we won," he said

"That shows the team spirit

We fight for each other."

"If you look at the history of the Champions League, you will see that it's always the big players that make the difference," said Wenger, playing down the influence of himself and Guardiola.

"The main heroes are on the pitch, not on the bench."