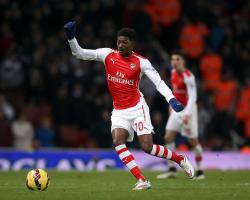 Police were called to the Barclays Premier League club's Hertfordshire training complex in March following a confrontation between Jule Niles, Arsenal executive Dick Law and her son's agent, and again last month when she had subsequently threatened to withdraw the winger from an under-21 match before refusing to leave the premises.

No charges followed, but Niles has been issued with a warning.

Maitland-Niles is seen as one of Arsenal's brightest prospects, having come through the academy and made his senior debut this season in the Champions League tie against Galatasaray in December.

The 17-year-old still lives at home and Wenger believes everyone only wants the best for his development.

"It is basically a private matter that I don't know really well about because I don't know what happened, but I know Ainsley very well and he has my complete support because he is a good boy and I am sure his mother wants a great future for him and to help him," said Wenger.

There are many times in the week with me in training."