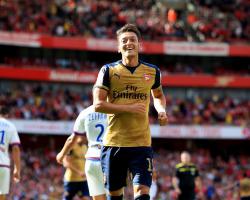 Arsene Wenger has backed Mesut Ozil to enjoy his strongest season as a Arsenal player to date.

The German World Cup winner has only shown his ability in patches since moving to the Emirates from Real Madrid two years ago.

Having netted just four Premier League goals last season, Ozil will be one of the players Wenger relies on to bolster his side's scoring ability as they look to put together a sustained title bid.

Ozil, 26, shone in Saturday's 6-0 Emirates Cup demolition of Lyon, scoring once and setting up two more, and Wenger said afterwards he hopes for a strong showing from his record signing.

"Yes," the Frenchman said when asked if this could be Ozil's best season at the club.

"He had a difficult start but slowly he has won over our fans and feeling the reactions in the crowd, he has their support.

"We have more cohesion than last year at the same period, everyone has a better focus

Last year was a post-World Cup year and some players came back mentally exhausted, hopefully we can take advantage of that."

Having been linked with a host of strikers all season, Wenger said earlier in the week he would rather look within his current squad to add more goals and - after hammering last season's Ligue 1 runners-up Lyon - he once again backed that stance.

"When you score six goals you don't have a desperate need (for a striker)," he said.

"We scored four goals in the FA Cup final, we create chances and score goals

We are open-minded, everybody is in the market and many clubs have big, big money.

"It is not mathematics, there is a logic in the game and that means that everyone is playing for each other, every game is different but I still say that we are open-minded but we are not in desperate need

We did not have (Danny) Welbeck or (Alexis) Sanchez available, they are big players.

We have shown again that we can score goals, that is what people expect from us."

It may only be a pre-season tournament but the dominant display against such strong opponents will have made a number of Premier League rivals sit up and take notice.

Wenger would not be drawn on his hopes for the season but insisted he will only be interested in what his side can achieve in the coming months.

"Let's be cautious on that front," he said when asked if this was a signal of Arsenal's intent.

"We finished third in the league and won the FA Cup last year, that is a good basis

Our target is to do better, we know we will put all of our effort in but it will be very difficult

We just want to focus on our quality.

"Top-level sport is about getting the best out of your potential and to achieve that we need to focus on our own performance and not worry about the others."

With their second Emirates Cup game coming against Wolfsburg on Sunday, Wenger confirmed Jack Wilshere will play, as will goalkeeper Petr Cech as he makes his home debut following his summer arrival from Chelsea.