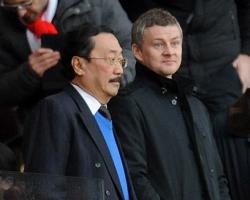 Former Manchester United forward Solskjaer, 40, travelled to London on New Year's Day as talks stepped up over him replacing the sacked Malky Mackay.

Confirmation of the appointment could follow on Thursday if negotiations between the Molde boss, Cardiff owner Vincent Tan and chairman Mehmet Dalman progress well after their meeting at the Emirates Stadium, where Cardiff were beaten 2-0 by a late brace from the Premier League leaders.

Talks are set to continue in London, with any press conference likely to be held back in Cardiff once formalities have been completed.

Wenger, who is now the longest serving manager in the English top flight, sees no reason why Solskjaer cannot make a success of what would be a first major managerial role.

"I have seen him before the game, and they played like they knew he was in the stand," said Wenger.

"Cardiff has the basic ingredients to survive in the Premier League.

"You would say if you look at their record they need to add a bit more goals offensively to stay in the league.

"If he (Solskjaer) can find that in the final third something clinical like he was, then they will stay in the league because they have the basic quality to do it."

Wenger continued: "It is a chance (for Solskjaer).

"Basically what you want when you are young is a chance and after you have to make the maximum of that chance.

"He has already experience as a manager in Norway, so he has learned his job.

Solskjaer has enjoyed a successful spell in charge of Molde, guiding them to two Norwegian titles and a Norwegian Cup.

The 40-year-old is said to have turned down the chance to become Aston Villa manager prior to the appointment of Paul Lambert at Villa Park, while he had also been linked with the current vacancy at West Brom.

However, earlier this week it had been suggested Solskjaer had reservations about taking the Cardiff job following controversial owner Tan's numerous disputes with Mackay over recent months.

Nevertheless, Dalman remained confident he could convince the Norwegian to take over at Cardiff City Stadium with the promise of money to spend in the January transfer window and reassurances over the working structure at the club.

Tan had not been scheduled to attend Wednesday's game at the Emirates Stadium, but flew into London especially to try to push through the deal.

Although the game at the Emirates Stadium could well prove to be the last in charge for caretaker boss David Kerslake - who was assistant to Mackay - and first-team coach Joe McBride, it will remain very much "business as usual" within the backroom staff until any changes are confirmed.

Kerslake said: "Although Joe and myself and the rest of the staff know it is only temporary, the last thing I said to the players that they made me feel immensely proud of the performance they put in.

"I am really unsure whether they knew or not (that Solskjaer was at the stadium).

"There was no talk of it on the team bus and the hotel and in the dressing-room, so I would not totally unsure about that."

Kerslake added: "Whoever comes in, obviously there is an important month coming up, so if he can add to it, make the squad better, then all well and good, but I believe the team are good enough to stay in the Premier League."

There have been no indications as to whether any of Mackay's former backroom staff would be kept on once a new manager has been appointed.

"No, (I have heard) nothing at all," said Kerslake.

"I am contracted to the club until the owner or chairman tell me different.

"I will be in work tomorrow as usual.

"Coaches and managers in football know that it's a precarious job and we just get on with it. There is no problem there, it is business as usual."