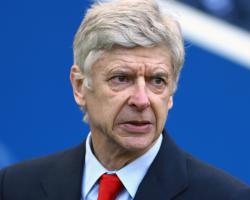 Van Gaal felt compelled to defend his tactical approach, even producing a leaflet for the benefit of the media, following criticism from West Ham manager Sam Allardyce, who suggested United "thumped it" in earning a 1-1 Barclays Premier League draw at Upton Park.

"There was no reason (for Van Gaal to defend himself)," said Gunners boss Wenger, speaking ahead of Sunday's FA Cup fifth-round clash with Middlesbrough.

"A big club has a responsibility to win and try to win with style - but first try to win.

"I didn't understand really what the problem was

Man United went a bit longer in the last 10 minutes - I found it completely logical.

"If I am in a game in the last five minutes, we have a free-kick and we have three monsters up front, I do not say 'play a short ball'.

"When we have (Olivier) Giroud on the pitch the players understand quickly that we can play a bit longer, we can cross the ball more, because he will win the ball in the air.

"I don't even think Van Gaal said to them 'go longer'

Giroud replaced Alexis Sanchez in Tuesday night's Premier League defeat of Leicester after the Chile forward suffered a blow to the knee which could yet rule him out of the Middlesbrough clash.

The France striker could play from the start against Manchester City's conquerors as Wenger felt Sanchez showed signs of fatigue in addition to the knock.

"He was not himself," Wenger added.

He had not the same intensity in his game as he had until now."

Wenger played down any prospect of Sanchez joining Arsenal's list of wounded after a recent hamstring problem.

"Muscular (hamstring) now should not be a problem," Wenger said.

"(But) he still has a swollen knee

"It's only a kick

You can move or you cannot move

If he has no problems to move his knee it's no risk.

"If he's not available for Sunday, he will be available next week.

"If there's any medical risk he will not play."