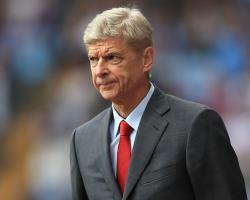 Wenger's 1,000th match in charge turned into a nightmare at Stamford Bridge last season, when the Gunners were 3-0 down inside 17 minutes and had Kieran Gibbs sent off.

Although the final 6-0 scoreline was tough to take, it also proved a turning point for Arsenal, who won their final five Barclays Premier League matches to secure fourth-place and then came from behind to beat Hull in the FA Cup final, so ending a nine-season trophy drought.

"It was a massive, massive disappointment, but on the other hand I must say that afterwards we showed great strength," said Wenger, who marked 18 years at Arsenal earlier this week.

"The way we responded until the end of the season would not have happened at many clubs.

"I will never forget that day, but was very proud with how we responded."

Wenger continued: "It was the lowest point of the season

When we lost 8-2 at Old Trafford (in August 2011) we had no team on the day, with nobody at the back, so that was explainable.

"The players will want to put things right after last season and will be up for it on the day."

Wenger maintains there is no reason why his team - who thumped Galatasaray 4-1 in the Champions League on Wednesday night - should not be confident of getting a positive result this time around.

"In life you must always think you are there to change what happened before, or you are fatalistic," said Wenger.

"A competitive guy is somebody who wants to make history and change what happened before.

"We have an opportunity to do that

What counts is the performance on the day."

Arsenal held first option on the 27-year-old, who had left to rejoin his boyhood club for Â£30million in August 2011 having come of age under Wenger's guidance after arriving in north London as a raw teenager.

The Gunners boss insists there should be no animosity between either party.

We influenced his life in a positive way, that is what we are about

The most important thing is that he is happy," Wenger said.

"I always understood that he could go back to Barcelona, because he is from Barcelona.

"It didn't go as well as he imagined it, certainly, because I felt that when he goes back to Barcelona he will finish his career there or come back to Arsenal.

Why? I don't know, he can explain that much better."

Fabregas has impressed in Chelsea's new-look set-up this season alongside Nemanja Matic and helped provide a supply line for in-form striker Diego Costa.

Wenger, though, is not surprised.

"That was always the strength of his game and if you look at the number of assists he has had this season, it is like it was before."