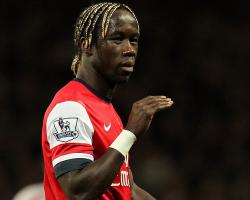 The full-back, who turns 31 on February 14, has yet to sign an extension past the end of the season and has been linked with a return to homeland clubs Paris St German and Monaco, while Turkish giants Galatasaray are also reported to be interested.

Sagna is said to have already turned down the offer of a two-year deal for around ?70,000 per week, with negotiations on-going as they are with midfielder Tomas Rosicky and German defender Per Mertesacker.

Wenger - who has himself yet to formally announce whether he will be staying on in charge of Arsenal next season - would like to get Sagna's future tied up sooner rather than later.

"When I say I expect (him to sign), it is more that I want

I hope that in the end I am right

We are not close at the moment," said Wenger.

"Because he is a defender we are ready to give him more than one year.

"He wants to keep his options open, because he is at the end of a contract

It is an important contract for him

He is 31 years old (this month) and I can understand."

Wenger added: "I am not all right with that (delay) because I would like him to sign just now, but I have to accept it.

"It is his freedom - the decision belongs to him."

Sagna joined Arsenal from Auxerre in August 2007 and has been a consistent performer, chalking up more than 250 appearances despite the setback of twice suffering a leg fracture.

Wenger said: "He is fantastic, not only a great player, but a fantastic attitude.

"You know when you start the game that Bacary Sagna will give you 100 per cent commitment, no matter where you play or against whom you play, that is a fantastic guarantee."

Asked if he felt Sagna's commitment to the Arsenal cause down the years would make it difficult for the player to walk away, Wenger said: "I believe that his future is here and any other decision would be wrong."