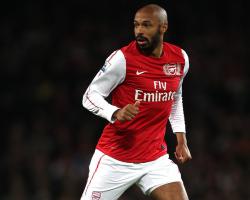 Henry confirmed on Monday he will leave the New York Red Bulls after four-and-a-half years with the Major League Soccer franchise, prompting speculation over a return to the Barclays Premier League club.

Wenger believes Henry, the Gunners' record goalscorer, will always be "an Arsenal man", having trained at their Hertfordshire base before a brief loan spell during January 2012.

The Gunners boss would welcome some sort of role for Henry with them again in the future, although the exact nature will be down to the 37-year-old following a period of reflection.

"Being a manager is a different job, but it is dedication

In this job, it is a dedication of your life

You have to realise there is nothing else (other) than that," said Wenger, who is now the longest-serving manager in the top flight.

"If you look around me, people who have worked without interruption for 30 years in this job, you will not find many."

''Thierry is intelligent, committed, he loves the game

He just has to think, 'Do I want to sacrifice all the rest of my life to be involved in that job?"

The best moment certainly of his life and of his career has been experienced here.

''Certainly one day he will come back here

In what role I don't know, that is what he has to think about: what direction he wants to give to his next life.''

Wenger feels having ex-Arsenal men on the bench can be positive, but only in the right balance.

He said: "(Assistant Arsenal manager) Steve Bould is one of my ex-players, before I had Pat Rice

I think it is important to have a staff (who are former players at the club), but as well not too many, there is a right number."

Wenger remains unconvinced Henry has the appetite to continue his playing career, although believes the World Cup winner has some unfinished business with the French national team, amid suggestions the veteran would be offered an honorary international cap for a potential friendly against Brazil in 2016.

After what happened with (Republic of) Ireland in the (2010 World Cup) qualifiers, the situation was not handled too well by the federation," Wenger said.

I hope he will get that, and get the honour he deserves."

Arsenal tackle Southampton with injury concerns in defence over Nacho Monreal and Kieran Gibbs, which could see Mathieu Flamini asked to play at the back, with 19-year-old Hector Bellerin also on stand-by.

The Saints were beaten 3-0 at home by Manchester City on Sunday, which saw Ronald Koeman's side drop to third place.

Chelsea, who drew 0-0 at Sunderland, are now six points clear of champions City, with Arsenal and Manchester United both looking to make up ground this week.

"We have not started very well, but we had never the squad together since the start of the season

It was a typical post-World Cup start.

"I think we have what is requested to do it (challenge for the championship again).

"We have to fight like mad now to come back as much as possible to show that we can compete in every single game.

"We have fought many times for the title

People always remember who won it, but the fight has been very tight for long periods in the last eight or nine years.

"We have a big competition in England, we have to accept that

They will be difficult to catch, but everybody will fight to come back on them."