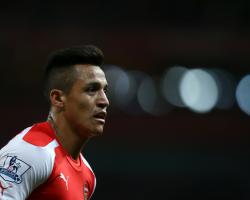 Wenger's side have frustrated their manager with a series of flawed displays during a run of one win from their last six matches in all competitions and the Gunners are desperate to stop the rot when Galatasaray visit the Emirates Stadium.

Instead of kicking on since qualifying for the Champions League group stages with a 1-0 victory over another Turkish side Besiktas in late August, the Gunners have become stuck in a rut.

The disappointing sequence includes a comprehensive dismantling in a 2-0 loss against Borussia Dortmund -- a scoreline that flattered the lacklustre Gunners -- in their Champions League Group D opener.

And the latest misstep came against north London rivals Tottenham on Saturday as Arsenal failed to turn their territorial dominance into goals and had to rely on a late equaliser from Alex Oxlade-Chamberlain to salvage a 1-1 draw.

To make matters worse, Wenger's midfield was decimated by injuries at the weekend, with Wales dynamo Aaron Ramsey, captain Mikel Arteta and England international Jack Wilshere all limping off.

Ramsey and Arteta will miss Galatasaray's visit, while Wenger hopes Wilshere can recover from his ankle problem in time to feature.

Despite the injuries, Wenger knows a win over Galatasaray is essential if Arsenal are to avoid putting themselves in an awkward position in their battle to qualify for the knockout stages of Europe's elite club competition.

"The positive is that we are unbeaten (in the Premier League), but the negative is that we have missed four points from the quality of the games we have played," Wenger said.

"Somewhere we have to keep that unbeaten record and I think at some stage we will win the games instead of drawing.

"It is the second important block (of matches) now.

"The first massively important game for us was Besiktas after the World Cup to get through and to start well in the Premier League.

"Our start was decent and now is the second block of games that will show how strong and good we are."

Arsenal defender Per Mertesacker, who is likely to captain the team in the absence of Arteta, sees no reason to panic at this relatively early stage of the season.

And the German centre-back is confident the strong sense of togetherness among Arsenal's squad will help them emerge from their current rough patch.

"We know that we have good team spirit in the dressing room, so we have to show it on the pitch," Mertesacker said.

"Against Tottenham we showed it in a good way, but we can do better, much better.

"Overall it was a good performance and confidence is coming back."

Oxlade-Chamberlain sounded a more cautious note however when he warned his team-mates not to get carried away with living up to the club's reputation for flamboyant play.

Tottenham drew first blood on Saturday by capitalising on Arsenal's desire to pass the ball out from deep in their own half and England midfielder Oxlade-Chamberlain said: "That is the risk you take when you play the way we play football.

"We send a lot of bodies forward in a positive and attacking fashion and you do leave yourself at times a little bit vulnerable to the counter-attack.

"It is just important that when we do, we have got people in the team that are willing to take the responsibility of holding back and being there to stop counter-attacks."

Galatasaray haven't won in nine visits to English clubs, but manager Cesare Prandelli insists his team, who drew their Group D opener 1-1 against Anderlecht, have the ability to shock Arsenal.

"In this group there are strong teams, but we have a chance against Arsenal if we keep fighting," said the former Italy national coach, who stepped down after the Italians went out in the group stage at the World Cup finals in June.