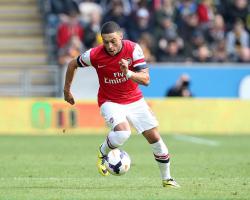 The 20-year-old has been troubled by a groin problem which has sidelined him since the Barclays Premier League win at Hull on April 20, and is doubtful for the FA Cup final on May 17.

By then, England boss Roy Hodgson will have named his 23-man squad for the World Cup - which is expected to include Jack Wilshere, who is in line to return from a fractured foot suffered on international duty at Norwich this weekend.

Wenger remains confident of a positive outcome with regards to Oxlade-Chamberlain.

"If he gets over the next three or four days, he will be available

If he doesn't, then we have to rest him and see

The next three or four days will be vital for him," said Wenger.

"He is desperate to go, and who wouldn't be? But we are in a job where your body responds or it doesn't respond.

"If it doesn't respond..

the body is always stronger

In the end, you need your body to play football.

It wouldn't be helpful for England for him to go there and not be 100 per cent fit."

Oxlade-Chamberlain scored for England during a friendly 2-2 draw against Brazil in Rio last June, and had just battled his way back to full fitness following a serious knee injury suffered on the opening day of the Premier League season, which sidelined him for five months.