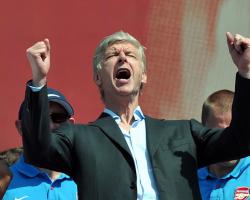 The Gunners finally delivered a first piece of silverware in almost a decade when Aaron Ramsey fired home an extra-time winner to beat Hull 3-2 and complete a remarkable comeback having trailed 2-0 inside eight minutes at Wembley.

The relief at the final whistle was palpable on Wenger, all of the Arsenal players and staff having finally lifted the cloud hanging over the Emirates Stadium club - and on Sunday everyone revelled in celebrations as two red open-top buses weaved their way around the streets of Islington to a civil reception at the Town Hall.

Wenger, who is set to sign his new deal before heading off to the World Cup, remains determined not to dwell on the most testing spell of his distinguished coaching career.

"I question honestly myself

We live in a world where people, they tell you always what you have not (done), they never tell you that you have done something as well," he said.

"I believe as well the quality of a club is the consistency and then the special players make you win the trophies.

"The quality of the consistency is important for the club and on that front we have been better than everybody else - there are only two clubs in Europe who have 17 years consecutively qualified for the Champions League and that consistency demands special values inside the club."

"It will force you first to be a bit more creative in the press conferences, but I trust you will be, I don't worry too much for that," he continued.

"I have nothing against this question if you say that in the other clubs as well, there are some clubs who haven't won for 20 years and they don't get this question at all.

"But basically, the whole club and the fans were under that kind of pressure for not having won for years, but that will help to get that off our shoulders a little bit and focus on getting stronger."

Wenger revealed he intends to sort out his new contract in the coming weeks.

Arsenal, though, still have to resolve whether full-back Bacary Sagna will remain, the France defender's deal set to expire this summer with Manchester City a possible destination, before they can look to bring in new recruits.

"First, we have to wait for Sagna - what will he do? - and (goalkeeper Lukasz) Fabianski

After, we have to bring in two or three players to strengthen the squad that is for sure," said Wenger.

"Unfortunately, everywhere we go, there are many teams on the market at the moment."

England midfielder Jack Wilshere came on in the second half of extra-time at Wembley and looked sharp as Hull tired.

Fellow World Cup hopeful Alex Oxlade-Chamberlain, however, did not feature in the squad as he continues to recover from a groin problem.

Both are set to now travel with England to their World Cup warm-up camp in Portugal.

"Alex was desperate to play in the final, and pain-wise, he could have played," said Wenger.

"But I judged him short physically and I felt that in the game, I wanted to play the players who were completely fit and prepared.

"He is a bit short physically

They said to me he can play 20 or 30, but you cannot program it like that, and so that is why I left him out.

"He is on the way up, but he needs more fitness work now."

Wenger added: "He is okay for England, they (both) go to Portugal."