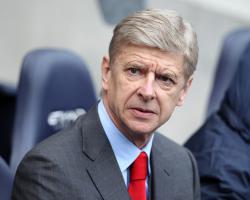 Bendtner had been seen as a solid back-up to lead frontman Olivier Giroud and came off the bench to score a late goal which helped beat Cardiff on New Year's Day, only to sprain his ankle in the process as the Gunners moved back to the top of the Barclays Premier League.

Arsenal are examining the full findings of a scan, and following further consultation with specialists, Wenger is likely to have a clearer idea of the diagnosis by the time he faces the media again after Saturday's FA Cup third-round tie against Tottenham at the Emirates Stadium.

Giroud missed the 2-0 win over Cardiff because of his own minor ankle problem and has now also been hit by a sickness bug, so is not expected to play in the north-London derby.

Summer signing Yaya Sanogo, meanwhile, is only just recovering from a back injury.

Arsenal do have German forward Lukas Podolski fit again, but he looked rusty when deployed in a central role against the Bluebirds.

Given Arsenal's lack of extensive cover, Wenger understands should Denmark forward Bendtner - who had looked on the verge of leaving the club in the summer window - be set for a prolonged spell of rehabilitation, then the club will have no choice but to bring in reinforcements

"We don't rule anything out.

"If Bendtner is out for a long time, that is the obvious position. We (would) have to (buy)."

As well as Berbatov, Arsenal had been linked with a big-money swoop for Atletico Madrid striker Diego Costa.

Wenger accepts whatever option he eventually decides, January is not the best time to try to land the ideal target.

"You can find a solution somewhere - a club that has financial trouble and wants to get rid of a big contract for five or six months, but to find in January exactly the player who will be tomorrow's star on the longer term is much more difficult."