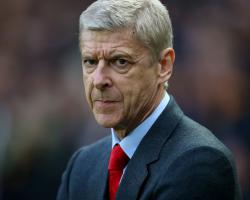 Reports have emerged the 20-year-old England forward wants to leave Anfield this summer, rejecting the offer of a contract extension said to be worth around ÃÂ£100,000-a-week.

Sterling's agent on Tuesday moved to distance his client from the unsettling speculation, stating there was a meeting scheduled with Liverpool later this week and "we will take proceedings from there."

Arsenal have been touted as a possible destination for Sterling were he to move.

However, ahead of Tuesday night's game against Sunderland, Gunners boss Wenger was keen to play down any agenda which could deflect focus from securing third place in the Barclays Premier League and the FA Cup final at Wembley on May 30.

"At the moment we are not in a transfer mode

We want to finish our season well," said Wenger.

"We have put massive effort in since the start of the season to come back into a potentially good position in the Premier League, and now we need to focus on finishing well

We have put so much effort in that it would be stupid not to finish the job well.

"The transfer period comes after the FA Cup final."

Pressed whether Arsenal would put in a bid for Sterling once the season was over, Wenger replied: "In the summer we will bid for people, (but) at the moment we are not in transfer mode at all.

"You absolutely want me to say something that I don't want to say.

Liverpool have always maintained they want to keep Sterling, having seen star man Luis Suarez eventually leave for Barcelona last summer after rebuffing a ÃÂ£40million-plus-ÃÂ£1 bid from Arsenal ahead of the 2013/2014 campaign.

Wenger said: "They have the right to decide what they want but at the end of the day, in our jobs you need the agreement of the player as well."

Manchester City midfielder James Milner is another player said to be on Wenger's radar, with the England international set to be a free agent in the summer.

However, the Arsenal boss gave little indication he was ready to make a move for the experienced 29-year-old.

"We have a big squad at the moment and we do not need a number of players," said Wenger.

"(Transfers) or contract talks at the moment are not in my mind at all.

"What I want is to finish well the season, and after I will make my decisions."