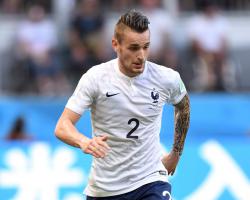 The protracted transfer of the France international, understood to be worth around Â£12 million, was finally confirmed on Thursday evening when Newcastle were able to announce the signing of Holland defender Daryl Janmaat from Feyenoord

Debuchy, 28, is seen as a Premier League-ready replacement for Bacary Sagna, who left to join Manchester City on a lucrative free transfer after helping Arsenal beat Hull in the FA Cup final at Wembley.

Arsenal have already brought in Chile forward Alexis Sanchez from Barcelona, and Wenger is now likely to turn his attentions to signing another defensive midfielder and a goalkeeper, with a deal for Colombia international David Ospina from Nice expected to be completed imminently.

Wenger is confident Debuchy can continue his progress with Arsenal, having been a consistent performer at Newcastle following a Â£5m move from Lille in January 2013, and will contest the right-back spot with England hopeful Carl Jenkinson

"The obvious replacement for Sagna was Debuchy

He knows what to expect and that's of course a huge advantage," Wenger said on Arsenal Player

"He is sharp in his marking, good with interceptions and quick to go from defence to attack.

"You feel he always has the desire to go forward, so I believe he will be perfectly suited to our style in that aspect."

"I know that Arsenal can win titles every year

Winning the FA Cup last season was something magnificent, but I hope that it is just the beginning and that there will be more to come next season," said Debuchy, who was part of the France squad which reached the quarter-finals at the World Cup, where they were beaten by eventual champions Germany.

"There are some really great players in this team

We saw that last season and I think it will be even better this season.

"I hope there is more silverware to come in the next few years."

German World Cup winner Sami Khedira has been a target, but reports in Spain suggest the midfielder will now look to sign a new deal at Real Madrid, with his agent maintaining there had been no fee agreed with Arsenal or Chelsea, who would be able to meet any inflated wage demands

Borussia Dortmund's Lars Bender, who missed the World Cup through injury, is another player Wenger has long admired.

Egypt defender Ahmed Fathi is having a trial at Arsenal this week, while Atletico Madrid's 19-year-old right-back Javi Manquillo is another potential new recruit

Arsenal play their opening pre-season friendly at Boreham Wood on Saturday, where Wenger will select a mixed squad including those players not on international duty at the World Cup.