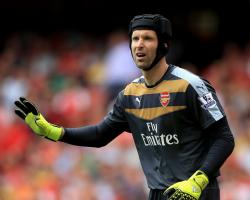 The manager did, however, acknowledge that his side lacked defensive organisation in conceding "soft" strikes as their Barclays Premier League campaign began with defeat.

Having spent ÃÂ£10million to recruit Cech from Chelsea this summer, there was a belief that Arsenal could again challenge for the title because defensive lapses would no longer be a serious problem.

However, the Czech goalkeeper looked unconvincing for both Cheikhou Kouyate's and Mauro Zarate's finishes, and his arrival at the Gunners appears to have corrected little so far.

It's difficult to see beyond that.

"It's not only him

We have experience along the back-line

"It was a collective lapse

There are many things to say about that

I know we were in trouble even before the free-kick was taken."

The result and performance again suggested Arsenal need to strengthen before they can hope to win the league for the first time since 2004, but Wenger, who has repeatedly been linked with a transfer for Real Madrid striker Karim Benzema, reiterated he is unlikely to make further signings.

"I can only repeat: if an exceptional solution turns up we do it

But after a defeat like that it's important not to think we must take a solution from outside," said the Frenchman, despite a disappointing display from first-choice striker Olivier Giroud and Theo Walcott having already been dropped.

"I would like to think we are responsible to buy the people and the coaches, and not the media

We have to look at ourselves and think we were not good enough."

Cech's fortunes were in contrast to those of Reece Oxford.

The 16-year-old West Ham midfielder impressed on his Premier League debut in largely nullifying the collective threat of Mesut Ozil, Aaron Ramsey and Santi Cazorla, and Hammers boss Slaven Bilic praised his character in responding to the occasion.

"He has a presence, he's mobile and quick, and he can turn and pass the ball, not just square balls," said Bilic, who tasted victory in his first game as a Premier League manager.

"He's not fazed about playing at the Emirates

I tried to help, I told him whatever he did wrong was my fault not his, but I'm lucky he didn't do much wrong.

"He's definitely going to be a big player

Let's be fair, Ozil had his moments but it's not easy to minimalise the game of these world-class players.

"He didn't know until yesterday that he was going to play

We talked the night before but it wasn't like, 'let's sit in a dark room, I have to tell you something Reece, you're going to play'

"That would make pressure

This was natural for him

For today, it was a good decision

He's definitely going to do it [succeed], there's no doubt."

Cech later posted a message on Twitter, aiming to put the poor result swiftly behind him

He wrote: " First game like this was not in the script - Mistake and no points but tomorrow is another day to get ready for the next game ! #COYG "