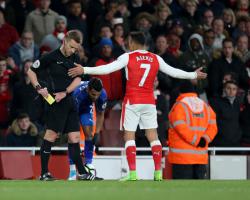 The Gunners needed an 86th-minute Robert Huth own goal to see off the reigning Premier League champions and keep alive their hopes of a top-four finish.

After Huth had inadvertently deflected Nacho Monreal's late effort past Kasper Schmeichel, Sanchez was attempting to prevent a long throw-in from Christian Fuchs as the Foxes chased an equaliser.

Having refused to move away from the touchline, Sanchez theatrically hit the ground holding his face as Fuchs took the throw, seemingly aiming the ball at the Chilean.

The ball hit Sanchez on the shoulder but he went down after a short delay, only to be booked by referee Mike Jones for not retreating far enough.

"In the first two attempts when Fuchs tried to throw the ball in, Sanchez stood next to him and didn't know he had to be further away," Gunners boss Wenger said.

He was not the required distance.

"The referee or the linesman should have told him

Fuchs was lucky not to get a yellow card because he threw the ball at him on purpose."

Sanchez later posted two pictures to Instagram of him nursing a split lip and holding a bag of ice on the wound - but Wenger revealed that came from a separate incident.

"Huth went really in with him I think," he added.

"I helped him to get up and he was bleeding on the lips."

Sanchez had come closest to breaking the deadlock as his effort on the stroke of half-time cracked against the crossbar.

Leicester did well at frustrating the FA Cup finalists for much of the game only to be undone by an unfortunate own goal.

"Does it keep us in the race for the top four? Yes," Wenger said when asked about the result.

We have absolutely to take the gamble to try to win the game at any cost."

"My analysis is we defended really resiliently for 85 minutes," he said.

"We had to against a very good side in Arsenal

We had to put blocks in and when we had to defend, we defended.

"We would have liked to have attacked a bit more but to lose in the manner we did was very disappointing.

"He (Huth) had to be outstanding tonight because of the quality he was up against but it was a cruel deflection because the shot wasn't even on target."