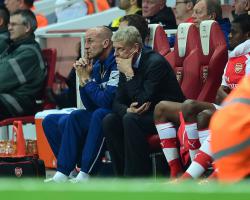 A much-changed Gunners side exited the competition at the third-round juncture for the first time in 12 years as Saints secured their maiden victory at the Emirates Stadium.

Few of the sell-out crowd could argue with high-flying Saints' victory, with even Arsenal manager Wenger admitting the best team edged the contest.

"It's disappointing because we had a good start and we made two unneeded errors on the two goals - and big ones," the Frenchman said.

"We lacked a bit of experience at the back, but overall they did well

We gave a lot and it's frustrating not to be able to score in the second half.

"When you look at the amount of possession we had, we have to give credit to Southampton, they played well and were well organised.

"They abused a bit the fouls in the middle of the park, but they are a good side and they played well tonight

Overall it is frustrating because we gave a lot."

Arsenal's attack proved toothless despite looking threatening on paper, while their inexperienced defence was too easily exposed.

The back four of Hector Bellerin, Calum Chambers, Isaac Hayden and Francis Coquelin had made just 54 Arsenal appearances between them coming into the match - the majority by the latter, playing out-of-position at left-back.

"We are a bit short, yes, because of the injuries we have," Wenger said.

"You sit there and think: (Kieran) Gibbs had a little hamstring problem and we could not play him, (Per) Mertesacker is a bit on the edge, and then we have no choice.

You have to be realistic.

"I don't want to go into any individual assessment, it's always very easy after a defeat

We gave a lot, I cannot fault the spirit, the attitude.

And the fact that we couldn't score

We scored on a free-kick, apart from that we couldn't score

"The amount of possession we had second half, if you play at home with that much possession, you have to score."

Wenger's frustration was in stark contrast to counterpart Koeman, who oversaw Southampton's fifth successive win in all competitions.

"I'm very proud, because winning away against Arsenal, that means a lot," he said.

"Everybody spoke about the changes of the Arsenal team

I think they made some changes but they took it very seriously.

"I think the game was on a very high level, with high tempo, and I enjoyed it

I enjoyed tonight, not only for the result finally, but the way we played.

"We tried to press and tried to play attractive, offensive, and that's not easy, because they have a great team, great players."

Koeman underlined his intentions in the competition by naming a strong side at the Emirates, with seven senior internationals in the starting line-up.

Match-winner Clyne was one of those without senior honours, although former Netherlands international Koeman believes he is good enough to break into the England squad.

"He has a lot of experience, he is playing very well from the beginning of the season.

"He scored a great goal

I think his performance was very good and I think it's an option for the national coach and I'm very happy to have Clyney in our team because he brings a lot of experience.

He shows that quality and it's very important for the team."