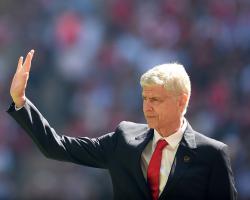 The Gunners open their campaign against West Ham at the Emirates Stadium on Sunday following a strong pre-season.

Arsenal triumphed in both the Asia and Emirates Cups while manager Wenger finally beat Jose Mourinho's Chelsea at the 14th attempt in last Sunday's Community Shield.

But although Wenger's side enjoyed a strong finish to the 2014-15 season, they had won just two of their opening eight Premier League matches.

And the Frenchman, heading into his 20th campaign as Arsenal boss, is desperate to avoid a repeat performance this term

"I'm motivated to start well," said Wenger, who will be without Jack Wilshere, Danny Welbeck and Tomas Rosicky for Arsenal's opener against West Ham.

"One of our targets is to start strongly, we've had good preparation and that should give us much-needed confidence.

"The Premier League is a fight in every single game so we have to prepare ourselves mentally for that and come out of the blocks straight away against West Ham.

"Every game of pre-season went well, and I cannot remember a much better preparation.

"We won the FA Cup last year, we finished third in the league so our target is very high - we want to win the Premier League."

Alexis Sanchez returned to training only this week following his exploits with Chile in the Copa America over the summer.

But Wenger refused to rule him out of taking part in Arsenal's curtain raiser at the Emirates.

He said: "It is about my decision

I think he came back in a good shape.

"Will he not be involved at all on Sunday? I don't know yet

He understands that perfectly well."