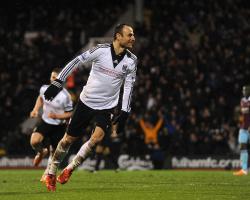 The Barclays Premier League leaders host north London rivals Tottenham in the FA Cup third round on Saturday afternoon with something of a selection headache in attack.

Lead frontman Olivier Giroud missed the 2-0 win over Cardiff on New Year's Day because of an ankle problem and has also now been hit by a sickness bug.

Bendtner came off the bench to score with just two minutes left to finally break Cardiff's resistance, but suffered a sprained ankle when putting the ball past goalkeeper David Marshall and the club are awaiting results of a scan for a more detailed diagnosis.

Wenger openly admits Arsenal will not rule out a move for a top-calibre player should the opportunity arise this month.

Fulham forward Berbatov, 32, netted his third goal in as many appearances in the 2-1 win over West Ham at New Year's Day. The veteran Bulgarian has been touted as the ideal January addition for Arsenal and could be available for a cut-price ?2million.

However, while the former Spurs and Manchester United frontman may well fancy a move to the Emirates Stadium - with a link to a video suggesting he could boost the Gunners' title ambitions being posted on the forward's Facebook page - Wenger intends to keep his thoughts on potential transfer targets guarded.

"He (Berbatov) is not a name that we have considered at the moment. We have not even been out on the transfer market, we have not contacted anybody," the Arsenal manager said.

"We are just analysing the situation, being very cautious until we are well informed about Bendtner and (Yaya) Sanogo as well, because he is back in training now. We will make a decision after that."

Wenger continued: "It depends on how long he (Bendtner) will be out for.

"But I don't want to go into any speculation on any specific name because that would not help where the player plays at the moment and would be disrespectful to the player's club.

"At the moment we are just considering our options.

"I must confess they are quite restricted; in the way that the players available can strengthen our squad are not on the road, they are all under contract, most of the clubs are in competitions where they need their best players.

"I don't rule anything out, but first I have ton assess well our internal situations with the injuries and the players coming back."

Aston Villa boss Paul Lambert may feel the upcoming Premier League showdown with Arsenal is of more importance than their FA Cup ambitions this season, but Wenger would love to get his hands on the famous old trophy once again.

"I don't believe that at all. We have not won trophies for a long time, it is an opportunity that we want to take that we consider," said Wenger.

"On top of that we have afterwards nine days until the next Premier League game, we can give absolutely everything in this game."

Wenger added: "It is the beginning of January after a heavy schedule in the Premier League and you want to keep your focus and get into the competition with full power.

"We haven't drawn a small team, so we are warned that it will just be another top-level game and that is the advantage of having a big opponent - your team is focused naturally."