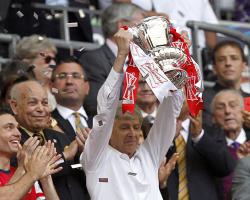 Wenger is set to sign a contract extension ahead of leaving for his punditry role at the World Cup, after which the 64-year-old Frenchman expects the market to hot up.

A bumper ?100million transfer war chest is said to be at Wenger's disposal, and long-serving director Lord Harris of Peckham admits the manager will be "encouraged to spend" as the FA Cup winners look to cash in on improved marketing and sponsorship deals.

"We want to win the Premier League and the Champions League

If we buy two or three players then I think we can, " Lord Harris said in the London Evening Standard

"We want to win

"We will support Arsene with the players he wants to buy

He has always been encouraged to spend."

Real Sociedad winger Antoine Griezmann is one reported target, while Toulouse right-back Serge Aurier is an option should out-of-contract Bacary Sagna leave, with Manchester City his likely destination for a lucrative free transfer.

New Barcelona manager Luis Enrique is said to be ready to off-load Cesc Fabregas and Arsenal do have a buy-back option on their former captain, who was reportedly subject of a ?30m bid from Manchester United last summer.

Asked if the board would back Wenger to again break the club's transfer record, which was the ?42.5m signing of Mesut Ozil in September, Lord Harris said: "We would

It would be easy."

He added: "There is a lot of paper talk

With the exception of (Lionel) Messi, (Cristiano) Ronaldo or (Gareth) Bale; we could buy most players."

Harris maintains the board were always relaxed over the Frenchman's long-term future, but admits Wenger will be a tough act to follow when he eventually does leave the Emirates Stadium

"He was always staying

There was never any doubt

He gave us his word back in the autumn, just after the season started, and it was just a case of sorting it out," Harris said

"If he wins the league and the cup and the Champions League in the next three years, then I am sure he will stay (on after that)

"Three years is a long time in football so let's see what happens.