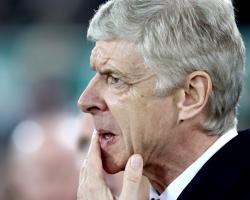 The Gunners have yet to make any major acquisitions this month and Wenger has again reiterated he has no intention to buy before Tuesday's 2300 deadline.

The Frenchman showed how strong his current squad is as he made 10 changes for Saturday's 5-0 FA Cup fifth-round victory over Southampton.

Danny Welbeck scored a brace, with Theo Walcott adding a hat-trick as the likes of Petr Cech, Laurent Koscielny, Mesut Ozil and Alexis Sanchez were rested from the starting line-up.

That quartet are expected to return for Tuesday's Premier League clash at home to Watford with the transfer window closing soon after full-time and Wenger, who will serve the second of a four-game touchline ban against the Hornets, insists he will not spring a surprise between now and then.

"Yes, of course," Wenger said when asked if his squad's strength influenced his thinking during the transfer market.

"It's not only to buy players, you have to have a need in your squad first of all

I believe that number-wise and quality-wise, we have what is required to do well.

Wenger said Arsenal would mirror most Premier League clubs by doing very little business in the final hours of the window, with his only addition this month having been young left-back Cohen Bramall from Hednesford Town.

"(It will be) very quiet

On our front, we have a big squad," he said.

"We are not in need of buying

On a general front it has been very quiet

That shows that there are not many players available who can strengthen English teams.

"It also shows that all the teams in England, especially the big teams, have big squads

That's why not a lot happened."

There are more likely to be outgoings, with Wenger still open to offers for full-backs Carl Jenkinson and Mathieu Debuchy.

Jenkinson has been in negotiations with Crystal Palace after Arsenal accepted a bid from their London rivals, but Wenger has cast doubt on the move as the deadline looms.

"There's no news about him at all," he said of Jenkinson's future.

"We are still open because we have many players in his position, but at the moment it doesn't look like something will happen."

Asked if a move to Palace was dead in the water, Wenger added: "For us, no

"We respect any professional decision

Carl Jenkinson is a great player who has a great attitude

There is no problem on that front.

"After that, he must find happiness with his conditions and where he goes and feel comfortable."

Karim Benzema has once again been linked with a move to north London but Wenger played down any interest in the Real Madrid forward.

"Because he is French," Wenger said when asked why there is constant speculation surrounding Benzema and Arsenal.

"And maybe there are some noises that he would leave Madrid, but as I just told you, there is no need for us to buy any strikers.

"In the summer window? That's not my worry at the moment

My worry is the next game against Watford."