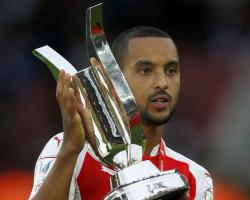 Walcott, 26, hit the only goal of the game as Arsenal beat Wolfsburg 1-0 to secure Emirates Cup success for the Gunners for the first time since 2010.

His future at Arsenal had again been questioned but Wenger now expects him to sign a new contract and, with the Frenchman adamant he does not need to add a striker in the transfer market - believes Walcott can produce the goods.

"Not yet but we're getting closer and closer

Hopefully we can finalise it very soon," he replied when asked if Walcott had already signed a new deal.

"It was another goal for Theo and I'm not surprised by that because I played him through the middle.

"I've always said that he's a goalscorer because he has the movement, he has the timing of the run, the speed for the finishing, and he has an eye for taking his chances at the right moments.

"When he gets into these positions he finishes well

Yesterday he nearly scored when he came on as a substitute, today he scored

I believe that Theo will score goals."

Walcott missed a couple of good chances to break the deadlock in the first-half when deployed in a central role.

Ironically, his goal came after the introduction of Chuba Akpom had seen Walcott switched to the flank - and Wenger believes the England international can perform in a number of roles.

When asked what Walcott's best position was, he answered: "It's a good question because it's a complicated answer

I think in all the three positions.

"If you ask him where he loves to play, I believe that even he will say that it depends a little bit on the period

When I've played him on the left he likes it as well because if he makes a good run he can score goals as well.

"In his ideal world he would like to play with a strong guy next to him, a player who is very strong physically, and play off him

We have so many offensive players which makes that very difficult to combine all of them together.

"He's not an aggressive striker, he's a mobile striker

He anticipates well, he understands quickly and when that is linked with his speed and execution it always makes him very dangerous."

Arsenal may have not matched the heights of Saturday's 6-0 thrashing on Lyon but Wenger was still pleased with his side's performance - which also saw Petr Cech make his first appearance at the Emirates Stadium.

"It was maybe less spectacular than yesterday because we had a big problem starting and getting going," he said.

"But overall it was a good performance where our technical level was good, our passing was good, maybe our final ball and finishing was not top sometimes.

Overall we had two good days."