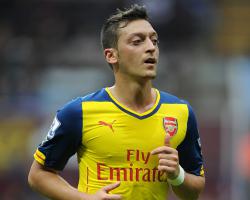 Ozil faces around two months of rehabilitation after scans on international duty with Germany discovered a "partial rupture of the outer band of the left knee joint" which he had suffered during Arsenal's Barclays Premier League defeat at Chelsea.

Wenger moved to allay suggestions he went against the advice of both the player and Arsenal's own medical staff by sending Ozil out for the second half at Stamford Bridge on October 5, as his side looked to get back into a match they would go on to lose 2-0

Wenger, however, maintained there could have been no way to forsee another injury setback after forward Olivier Giroud fractured a bone in his foot when making a last-minute tackle against Everton and France defender Mathieu Debuchy caught his studs in the Emirates Stadium pitch which resulted in a broken ankle

"What is different (this season) is we have a bit more prevention than before for the players to prepare for the competition, and I think we have made progress," said Wenger

"(But) for us this season, we had big injuries and coincidental injuries

"For example Giroud - I don't know what we can do about Giroud's injury? Debuchy was on his own when he did the ankle, then you have Ozil

"(Do) you know how Ozil did the injury? Passing the ball with the outside left foot

He must have done that a million times

"Ozil was on his own

"There are a lot of post-World Cup injuries and not many soft tissue injuries."

Wenger, though, stressed there should be no concerns over how the player was managed at Stamford Bridge

"He (Ozil) did not tell me anything during the game, I did not even know," said Wenger, whose side tackle Hull on Saturday looking to close back ground on the top four

"What happened was that at half-time, just before we went out, the physio told me 'Ozil has a little pain with his knee, but it is not bad'

"He wanted to go on and I told him 'if you don't feel well, tell me and I will take you off straight away'

He never did that during the whole game, and after that I left him on because we were in a position where we needed to score a goal and he can deliver the final ball

"Then after the game, he went to Germany

With Germany, they thought at the start it was nothing.

"We played on Sunday, on Monday he was off, and on Tuesday they gave him the day off

He was supposed to practise on Wednesday

"On Wednesday morning, he said he could still not practise

"They sent him for a scan, and in this scan they discovered that he had a knee ligament injury which is quite serious."

Defender Laurent Koscielny is not available because of an inflamed Achilles

Winger Theo Walcott is set to play for the club's Under-21s on Friday after nine months out with a knee injury, while captain Mikel Arteta could feature against Hull after a calf problem