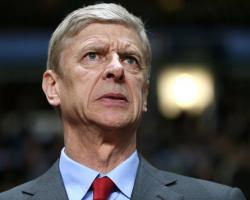 Arsenal have a break from their Barclays Premier League title quest when they tackle League One Coventry in Friday night's televised fourth-round tie at the Emirates Stadium.

It has been almost nine years since Patrick Vieira held aloft the FA Cup after a penalty shoot-out win over Manchester United in Cardiff - and Wenger would love nothing more than to taste that success again back at Wembley on May 17.

"I have been lucky enough to win it four times, but unfortunately we haven't won it for a long time now so in fact I am even more focused to do well in this competition now," Wenger said in the February editon of the official Arsenal magazine.

"I would love the club to win the FA Cup again."

Wenger added: "The magic of the cup is when you get close to the end of the competition, the dream becomes more real.

"We all had that dream as kids, we were educated by seeing people lifting cups that became our dream - to make it come true is one of our targets."

Wenger accepts it is not time to dream about Wembley glory just yet, adding: "I would say when you get to the quarter-finals then you think there are only two games to go before you're in the final and until then you just want to get through each game."

Arsenal are expected to show several changes for the cup tie, with Denmark forward Nicklas Bendtner a possible starter should he have recovered from the ankle problem he suffered against Cardiff on New Year's Day.

Arsenal are on the lookout for some additional attacking cover following the season-ending knee injury to Theo Walcott.

Wenger was photographed at Heathrow Airport on Wednesday, sparking rumours of a dash to Europe to seal a transfer.

However, Arsenal sources maintain the manager was returning from a personal trip rather than setting off for a scouting mission.

Wenger is said to be keen on Germany international Julian Draxler and also Mirko Vucinic of Juventus, the Montenegro forward.

Draxler - reported to have a Â£37million buy-out clause - has made no secret of his appreciation of the English Premier League, and Arsenal in particular, with the 20-year-old suggesting he would consider his future in the summer.

Schalke chief executive Clemens Tonnies, though, feels the player is already in the best place to develop his game.

Speaking to German newspaper Bild, Tonnies said: "I am of the opinion that Julian should play for Schalke next season. That is my personal advise to him.

"He should not let the interest from abroad play with his head.

"It is best for his development when he can play without much pressure and with a clear mind.

"Looking back, at the start of the season he was under a lot of pressure then and the exact same thing will happen again if he moves.

"There are a number of big clubs after him, but we have no intention of selling him this winter.

"Even if we do not qualify for next year's Champions League, that does not mean we will have to sell Julian."