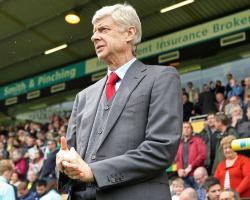 The Gunners on Friday confirmed the Frenchman, their most successful manager, had signed a new three-year deal with them.

Wenger claimed his eighth major trophy in the job - and the first since 2005 - when his side won the FA Cup earlier this month.

And the 64-year-old, who was appointed in 1996 and is the Premier League's longest-serving current manager, told arsenal.com: "We are all determined to bring more success to this club.

''The club has always shown faith in me and I'm very grateful for that.

Arsenal's transfer market activity - or perceived lack of it, aside from high-profile sales - has been a source of frustration for some of their supporters in the last few years of Wenger's reign.

However, he has stressed the importance of having a "successful" time during the present transfer window as he looks to build on the cup triumph.

Wenger said: "We know we have to..

have a successful June and July, that's where you strengthen the team.

"It's very important that we are good now in the next two months until the end of August, that we can give to the team some more quality."

Asked about the fans expecting a big summer, Wenger said: "Yes, they should expect that.

"What I can promise is that we work very hard on a market that is very, very congested with many people who have a lot of money.

"But we have a big advantage, players want to join us and if we find the right quality I'm sure we can strengthen the team."

"The fact that the Financial Fair Play rule comes in hopefully will stop (the) craziness that happened in this (transfer) market.

"With these two (things) together, I think we can fight on a more even level than before."

Although their 2013/14 top-flight title bid faltered in the second half of the campaign, they qualified for the Champions League for a 17th consecutive season.

Wenger's prudence in the transfer market has served a purpose during the years when Arsenal have been paying for their move from Highbury to the Emirates Stadium in 2006, but it became a source of consternation as it continued after the board made it clear there was money to spend.

He did splash out last summer, spending a club-record ?42.5million to sign Mesut Ozil, but the midfielder struggled to maintain his early high standards as the team around him was decimated by injuries.

While many in the stands have wavered in their support for Wenger, though, the board have remained steadfast.