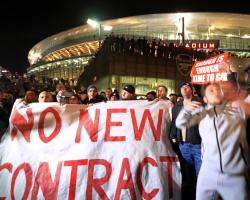 The Frenchman has seen opposition to his tenure grow in recent weeks after presiding over four defeats in the Gunners' last six games.

They have fallen off the pace in the Premier League title race and face a battle to finish in the top four after losing against Watford, Chelsea and Liverpool.

And fans organised a march from the club's former Highbury home to outside of Emirates Stadium ahead of their second-leg meeting against Bayern, with the Bundesliga giants all but through to the quarter-finals having thrashed Arsenal 5-1 in Germany last month.

The protesters held aloft banners calling for Wenger to leave and for the club not to offer the 67-year-old a contract, with his current deal expiring in the summer.

As well as their anti-Wenger signs, there were plenty of chants aimed at the manager and the board.

"We want Wenger out," was the most popular chorus among the disgruntled numbers, while chief executive Ivan Gazidis was also targeted with chants of "Ivan, do your job".

The march ended on the steps of the 60,000 capacity stadium which will be part of Wenger's legacy at Arsenal following a reign of over 20 years.

Other fans made their way to the ground as normal as the marchers, watched over by a minor police presence, continued their protestations.

Wenger has yet to reveal his intentions beyond this season, insisting he will make a decision on whether to stay or leave either this month or next.

He has, however, stated he will not retire and will seek another managerial position if he opts to end his stay in north London.