Wenger- Fit Wilshere is no gamble 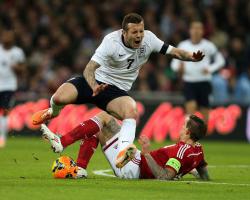 Wilshere is closing in on a return from the fractured foot suffered while on international duty in the friendly against Denmark on March 5.

The combative midfielder had originally been expected to be in contention for this weekend's Barclays Premier League game against West Brom, but now the final match at Norwich looks an outside possibility at best ahead of the FA Cup final on May 17.

Hodgson indicated he would have no qualms about naming Wilshere in his 30-man squad, and given England have three warm-up matches and a training camp, he feels the 22-year-old will have enough time to get himself in shape ahead of the Group D opener against Italy in Manaus on June 14.

"It is not a gamble if he is completely fit

It is a strengthening of the (England) team," said Wenger.

"If there was a medical doubt then yes it would be a gamble, but I think he will be completely safe and on that front medically he should be all right."

Alex Oxlade-Chamberlain is another Arsenal player hoping to be on the England jet to Brazil.

The midfielder missed Monday night's 3-0 win over Newcastle at the Emirates Stadium because of a niggling groin problem, and Wenger maintains his return will not be rushed.

"Chamberlain at the moment has an inflamed groin

We will see how he progresses," Wenger said.

"For the World Cup he should be okay, for us, will he come back for the end of the season? I don't know."

Right-back Bacary Sagna is a doubt because of a knee problem.

The France international is out of contract in the summer and as yet there have been no developments on the club's offer of a new deal.

"It is in his camp so he can give you a much better answer than I can," Wenger said.

"I would like the players to stay for more positive reasons, not for fear of failing somewhere else.

"You want the players to be part of this club.

"I believe that is something we are keen on here is to help players to love the club and stay for the good reasons, for the football we play, for the values we rate and for being part of the club that is special.

"You want the players to stay for that and the ambition we have."

Wenger himself is out of contract in the summer and so theoretically could be set to take charge of his final home match at the Emirates Stadium on Sunday.

The Frenchman joked: "There is always a chance because none of us know how long we will live, but on my desire, no, there is no doubt."

"For us it is to finish as close as possible to the top and to win our remaining games," he said.