Wenger frustrated as Arsenal fail to break down Boro 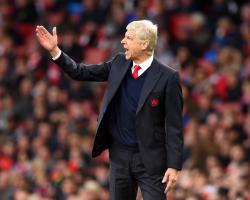 The Gunners' boss was celebrating his 67th birthday as they fought for their seventh consecutive league win but an impressive performance from Boro goalkeeper Victor Valdes and a lack of creativity in midfield kept the game goalless.

Speaking about the performance, Wenger said: "I think I have a frustrated face and I am (frustrated).

"I felt that with 75 per cent of the possession, we did not have our usual pace and not enough sharpness in our movement.

"The first 25 minutes were quite satisfying but Middlesbrough came back in the game with a break.

"In the end we could not do enough to win it but at least we were concentrating enough not to lose it.

"We could have lost the game in the first half, we lacked a bit of creativity."

Arsenal were missing two key players due to injury, with Santi Cazorla sidelined due to an Achilles injury and Olivier Giroud suffering from a problem with his foot, but Wenger did not want to use their absence as an excuse.

He said: "We always miss Cazorla

At home, from deep midfield into the final third, his pass is always quick and accurate.

"We didn't make enough from our set-pieces and our crosses so of course, the first thing that comes in mind is someone with a bit more size and a physical presence could have helped.

We are an offensive team and we didn't manage to score, which is frustrating.

"Cazorla I don't really know, we need to see how he recovers on Monday, but Giroud could be in the squad on Tuesday night."

Middlesbrough manager Aitor Karanka was disappointed his team could not come away with a win after a number of great chances but admitted he was pleased with the performance.

Former Barcelona shot-stopper Valdes was kept busy but the Boro boss believes it was a full team performance.

He said: "I think we could have won the game but Petr Cech was the best player for Arsenal and we did a really good game today.

"All of our players played a key part today

Our plan worked which I am really pleased about and for 95 minutes we were 150 per cent concentrating on the pitch.

"It is good to show everybody that we have a plan and now we need to look ahead to Bournemouth.

"Victor in the last two or three years with his (cruciate ligament) injury, it has been the worst moments of his life in football.

He has been really good for us."