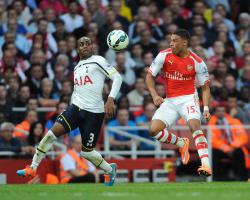 The 174th clash between these sides looked to be going the way of the Lilywhites at the Emirates Stadium, where Nacer Chadli struck in the second half of a match in which Spurs defended impressively and played on the break.

Try as they might, though, their resistance would not hold, with Alex Oxlade-Chamberlain slotting home from close range after the ball came to him in a penalty-box melee.

Wenger felt his side deserved more than a 1-1 draw having dominated the possession and shot count, with the time-wasting antics of Spurs particularly rankling.

"I must give credit to my team because once again we came back and we put a huge effort in with a high work rate all together," the Frenchman said.

"It's one of the few times that we've had so much possession against a Tottenham team since I've been here, but they defended well

You have to give them credit.

"Younes Kaboul and Jan Vertonghen did well, as well as Hugo Lloris

They took every second they could again, to make the game last as little as possible.

"I would like to see the referee deal with that in the proper way for once.

"Slowing the game down is normal and I understand it completely.

"But the referee's there to make the flow of the game respected and I would like an English referee to do it for once.

"People pay money in the stands to watch football

It's as simple as that

It's only a respect of the people who pay money to watch football."

That frustration with his opposition was compounded by the fact Wenger now has yet more injury problems to contend with.

Mikel Arteta and Aaron Ramsey were forced off in the first half with calf and hamstring complaints, respectively - injuries he says will rule them out of Wednesday's Champions League clash with Galatasaray and next weekend's Premier League encounter against Chelsea.

Jack Wilshere could also be absent from those games with an ankle issue, leaving Arsenal struggling for numbers once more.

"I don't know how long they'll be out but they will be out until next week," he said of Wilshere and Ramsey.

The two others are out for Chelsea for sure.

"Suddenly we are short because if we lost three players today, and let's not forgot that we already have two out long-term plus Theo Walcott, that's six

Abou Diaby is not ready so it starts to become a worry."

Like Arsenal, Spurs too are hosting Turkish opposition this week.

Besiktas arrive at White Hart Lane on Thursday for a Europa League tie with a Tottenham side boosted by what Mauricio Pochettino thinks was a solid result at their near neighbours.

"After the game, when we analyse it, I think Arsenal managed the ball, managed the possession.

"But our plan, as you saw on the pitch, was to be compact, to be able to receive in the defensive line and, after we recover the ball, to go forward quick to surprise Arsenal."

Put to him Wenger's accusations of time-wasting, Pochettino looked surprised.

"So, now, when I analyse in this moment if we were wasting time, I think no.

"We tried to play in our way, tried to stick to our plan in the game, but, okay, this is football."