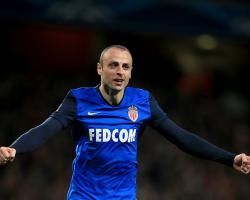 The French side, whom Gunners boss Arsene Wenger guided to the Ligue 1 title in 1988, had been viewed as one of the unfavoured seeds for the knockout stages, but proved anything but as Arsenal failed to get out of first gear and were punished as Olivier Giroud had a night to forget, missing several good chances.

A 25-yard deflected effort from Geoffrey Kondogbia put Monaco ahead on 38 minutes to give them a crucial away goal in the first leg of the last-16 encounter.

After Giroud had spurned another two great chances to get his side level, former Tottenham striker Dimitar Berbatov crashed in a second on the break.

Substitute Alex Oxlade-Chamberlain, returning from a groin injury, grabbed Arsenal a lifeline in stoppage-time, but as the Gunners naively went in search of an equaliser, they were dealt a hammer blow on the break again as Yannick Carrasco slotted past David Ospina as the boos rang out around the Emirates Stadium.

"Congratulations to Monaco, they had a perfect result and played the game they wanted to play

On our side, I believe that we missed the chances and we were a bit suicidal defensively," said Wenger.

On the second and the third goal we were suicidal.

"We had the luck to come back to 2-1, but not the right to give away a goal the way we did because that makes our task extremely difficult in the second leg.

The heart took over the head and at that level it doesn't work.

"Our weakness was more down to mentality

We rushed our game, we knew coming back at half-time it was important not to concede a second goal and we were too impatient."

Wenger added: "Mentally we were not ready or sharp enough to get into this game

We paid for it.

If you look at the number of chances we missed, at that level you cannot afford that.

"We used our hearts more than our brains.

They wanted to come back to 2-2 and forgot their elementary cautiousness."

Wenger had warned Arsenal against complacency ahead of a tie he insisted was still very much "50/50", despite his side's good form in the Barclays Premier League.

"I hope not (that there was complacency)", he said.

"(But) it looks like that when you don't have that kind of sharpness.

Giroud had netted his 50th Arsenal goal in Saturday's 2-1 win at Crystal Palace, but Wenger accepted the France forward had "an off night" before he was substituted for Theo Walcott on the hour.

Arsenal must now score three goals at the Stade Louis II in Monte Carlo next month, against a team which before this tie had conceded just twice in some 17 matches.

Wenger said: "We have a smaller chance, but no matter how big the chance is we will go for it.

"We need to recover from this disappointment and prepare for the next game (against Everton on Sunday)."

Monaco coach Leonardo Jardim felt his side were rewarded for sticking to their gameplan.

"Arsenal obviously have some excellent individuals and what we were able to do was nullify their threat," he said.

"We were very organised and were also able to attack with a lot of quality.

"No one really thought that this result would have been possible.

"That said, we achieved it, but Arsenal are a great side and we are only halfway through this knockout tie."