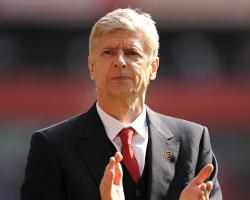 The Gunners head to Sky Bet Championship-bound Norwich on Sunday looking to maintain momentum ahead of the FA Cup final against Hull at Wembley, when they will aim to end the club's long trophy drought.

Arsenal led the top flight for 128 days following a fine opening half to the campaign, only to then see their championship challenge fall away in the wake of heavy defeats at rivals Manchester City, Liverpool and Chelsea as the squad was depleted by injuries to key men.

Nevertheless, for all their shortcomings, Wenger's side could end the season just seven points behind champions-elect City - or even fewer should the most unpredictable of seasons take another dramatic twist on the final day.

It is a margin Wenger believes can be clawed back when the action kicks off again in August.

"You know, seven points is nothing

It is two games," said Wenger, who could have England midfielder Jack Wilshere back from a fractured foot.

"But on the other hand, every team of the top four will be frustrated because you will think, 'Ah, we could have got this point and if we had done it, we would win the league'

If you look at Chelsea or Liverpool, they will say the same.

"We have to continue to develop as a team

"How can we do that? We have hard work in the summer to achieve that."

Wenger added: "My team has shown a remarkable mental stamina and consistency in their attitude and I am very proud of the way they responded.

"We are looking at some aspects where we can improve internally and we will work very hard during the summer to do that."

City passed 100 Premier League goals when they eventually swept aside Aston Villa on Wednesday night to put themselves firmly on course for a second league title in three seasons.

Liverpool too will hit treble figures should their potent strike force get on the scoresheet again at Anfield against Newcastle this weekend.

Wenger concedes admiration for the way the top two have gone about their business, giving his own team food for thought.

"To be completely honest, a team like City scored 100 goals so you have to say their offensive potential has been absolutely brutal and fantastic, Liverpool as well," the Arsenal manager said.

"We have scored 66 at the moment, that is where we have room for improvement."

Arsenal head into the final match of the season spared from a battle to secure a top-four finish after pulling clear of Everton following Manchester City's timely win at Goodison Park.

Midfielder Aaron Ramsey hopes that will allow a sense of freedom at Carrow Road - where only a massive 18-goal swing over West Brom, who host Stoke and would have to lose - would save the Canaries from the drop.

"It was important because we want to be testing ourselves against the best teams in Europe in these fantastic stadiums, so to secure fourth was a relief and hopefully now we can go into the last game before the FA Cup final without any pressure," Ramsey said on Arsenal Player.