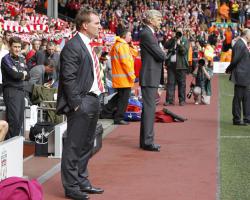 Wenger's Arsenal, who have qualified for the knockout stages of Europe's elite competition for a 15th consecutive season, on Sunday face a Liverpool side who were Barclays Premier League runners-up last term but are toiling this season.

The Reds are out of the Champions League, having qualified for the first time in five years, and 11th in the Premier League entering this weekend's fixtures.

Much of the difference between Liverpool last term and this has been attributed to the departure of Luis Suarez to Barcelona.

While Wenger declined the opportunity to appraise Sunday's opponents, he offered an opinion on why Sanchez moved to the Emirates Stadium, rather than swap places with Suarez.

The Gunners boss said: "All the players want to play in the Champions League

We have quite a good continuity on that front."

Sanchez has adapted well to life in the Premier League, but many of Liverpool's signings have struggled to make a similar impact and Reds boss Brendan Rodgers is facing a stern examination of his calibre.

Wenger, who has been Gunners boss for 18 years and survived his fair share of challenges, said: "Everybody goes through periods where it goes a bit less well.

"Our job is to survive crises

Part of the job, not all the job.

"When you want to make a long career, you cannot only win, unfortunately."

Criticism of Wenger resurfaced after their most recent Premier League away match, when he was booed at a train station following the 3-2 loss at Stoke.

Arsenal responded by beating Galatasaray and Newcastle, scoring four goals in each match, but return to Anfield, where last season they lost 5-1.

The Gunners conceded four goals in the opening 20 minutes against a rampaging Reds as their title challenge unravelled.

"Sunday is a good game for us to show that we can have continuity in finding a good balance between attacking well and defending well.

"Liverpool are always very strong at home and that's why we want to continue to be faithful to our philosophy and play our game, but as well be solid defensively."

Asked if the pain of last year's loss at Anfield lingers, Wenger added: "Every defeat hurts

Every defeat is a scar in your heart forever

We have as well very good memories at Liverpool

We won many games at Liverpool as well.

"And even last year, we lost against them

A week later against the same team we won 2-0 at home in the FA Cup.

"Liverpool last year scored over 100 goals in the championship, they were very good going forward.

"This season they've scored 19 until now so they are not on the same trend offensively, but I must say they started out the blocks very strong and we were too late to get into the game."

The match is between two top-four contenders, but Wenger is not yet looking to the end of the season.

"When you get over the hill to January, you look towards the end," he said.

Sanchez will experience the hectic Christmas calendar for the first time.

"He benefited from the fact I didn't take him to Galatasaray," Wenger said.

"He needed a little breather

It will have helped him.

"Players are used to a break over Christmas

The players from South America used to go home and in England they cannot do it.

"It's a shock for the system for everybody

Many of them suffer physically."

Wenger persuaded Sanchez to move to Arsenal after meeting his agent during the World Cup last summer and then spoke with the Chile forward.

Wenger said: "I just tried to convince him that the way we play football would suit him."

Sanchez has been likened to Thierry Henry, who announced his retirement this week.

Henry has spoken of his desire to enter coaching, with a warning from Wenger.

The Gunners boss added: "He has enjoyed it now

It's time to suffer as well for him

Coaching is of course enjoyable, but it is as well suffering.

"He will see it's not easy to get everybody to score the goals that he scored."

Theo Walcott, Alex Oxlade-Chamberlain (both groin) and Nacho Monreal (ankle) face fitness tests to determine if they can play at Liverpool, but Wenger fears midfielder Aaron Ramsey will be out until the new year with his hamstring problem.

The Frenchman said: "I'm scared that he will miss the Christmas period

He should be back end of December, early January."