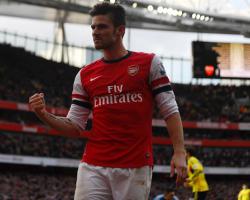 Giroud had been left on the bench for the last two matches following a dip in form and some unwanted headlines about his private life.

However, the 6ft 4ins frontman delivered the perfect response with a first-half double as Arsenal put the midweek Champions League defeat to Bayern Munich behind them.

Czech playmaker Tomas Rosicky converted a well-worked third ahead of the interval, before defender Laurent Koscielny headed in from a corner just before the hour.

Sunderland - who take on Manchester City in the Capital One Cup final at Wembley next weekend - grabbed a consolation through a 25-yard drive from substitute Emanuele Giaccherini, but remain deep in relegation trouble.

Giroud opened the scoring on five minutes, before then capitalising on a poor backpass by Santiago Vergini to effectively kill off the match as a contest inside 31 minutes.

"I had no hesitation about his strength of character

Of course you want him to come back into the team and be successful, which he was today because he scored two goals," said Wenger.

"One great one at the end of great movement and the other a little bit of a gift from Sunderland, he got an assist as well so he did well."

Wenger felt the Dutch forward, who received a hero's welcome on the pitch at half-time, would have appreciated the team's efforts.

We did the job in the first half and I think we scored two great 'Arsenal' goals," said Wenger.

Certainly Dennis will have been pleased to have seen him play."

Bergkamp, who is coaching at Ajax, suggested he would like to return to Arsenal in the future.

Wenger said: "I am not against it one day

He has the qualities, but you need to have the need as well because we have a big staff already.

"He is now at two clubs that made Dennis Bergkamp

The first, and certainly the most important one, is Ajax.

"He is at Ajax now and a coach there

The second club that is important in his life is Arsenal

Maybe that will be the next step."

Wenger left out club-record signing Mesut Ozil, who had missed an early penalty against Bayern, because of a thigh problem.

"It was a kick

He should also be available next week

He is in the dressing room at the moment," Wenger said.

The Gunners boss also hopes both defenders Koscielny (back) and Nacho Monreal (foot) will recover from their knocks to be fit to face Stoke.

Sunderland boss Gus Poyet, meanwhile, was less than impressed with his side's capitulation which was far from ideal preparation for their upcoming Wembley date against Manchester City.

"I am not accepting this defeat

We were poor in many ways and were second best in everything, Santiago (Vergini) was not the only one," the Uruguayan said.

Poyet continued: "Now no-one has put themselves on the teamsheet for next week, they all had a great chance to show me, but everything I had in mind went in 90 minutes

Now I have to start from zero

"Arsenal proved again that they can beat anyone, but sometimes players pick the team for you, but now I have a few options for Wembley.

"There are plenty of similarities between the way Arsenal and Manchester city play for me to ponder on."