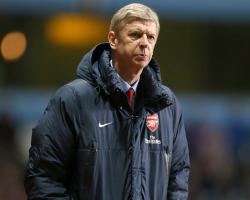 Two goals in the space of one first-half minute from Jack Wilshere and Olivier Giroud at Villa Park proved enough for the Gunners at despite a late Christian Benteke reply.

The result lifted Wenger's men back to the top of the Barclays Premier League and provided a good riposte after the other members of the top seven won over the weekend.

Wenger said: "It was a big win for us tonight. We had to give a strong response.

"Everyone looks at you to see if you drop points because they have made their points over the weekend.

"You are a bit more under pressure when you play last because you know you are not allowed to drop points.

"You can only give one answer - to win the game."

Arsenal looked to be cruising towards victory until Benteke, after four months without a goal, suddenly rediscovered his scoring touch 14 minutes from time to set up a frantic finish.

Wenger said: "There were two different halves. The first half was about playing well, the speed of our passing and control of the game. The second half was more about fighting.

"Villa played straight through the middle, a very direct game.

"Maybe we were a little bit too cautious just to keep the 2-0 and it was then about fighting. Our defenders kept us in the game.

"It was a nervous finish but overall you have to say Villa did fight until the end and were committed for every single ball.

"You have to give them credit for that. It is why it was a difficult game for us but I like the fact we are mentally ready for a fight."

England midfielder Wilshere showed his class by finishing off a neat move in style to open the scoring and then providing a perfect pass for Giroud to double the lead.

Wenger said: "He has found his change of pace again.

"I would say his game is about that and his penetration. He is not only a passer but is a guy who is incisive with the ball. It is his strength.

"For that you need to be at the top of your game physically. He is coming back to his best."

The concerns for Wenger were injuries to Tomas Rosicky, who took a blow to the face in a challenge with Gabriel Agbonlahor, and Nacho Monreal, hurt when fairly tackled by Ron Vlaar.

Wenger said: "Rosicky has a bad nose. I don't know if it is broken or not but it looked bad.

"I didn't see it (the incident) and Tomas doesn't know if he did it on purpose or not.

"Monreal I think was an accident. We have to check his metatarsal tomorrow morning. He got a kick on the top of the laces."

Villa defender Nathan Baker suffered a sickening injury in the first half when he was struck in the face by a shot from Serge Gnabry.

Baker hit the ground and hardly moved before being carried away on a stretcher wearing an oxygen mask several minutes later.

It was later reported he had suffered mild concussion and was not seriously hurt.

Manager Paul Lambert said: "He is a little bit groggy but he is okay. He can't remember a thing about what happened.

"That certainly threw us. You work all week on what you want to do and we lost him at a vital time."

Villa overcame that but were stunned by Arsenal's quickfire double in the 34th and 35th minutes.

It was not until the second half that they threatened again and Lambert thought their efforts might have deserved more.

He said: "That was more like it in the second half. I don't think if we'd got an equaliser anyone could have begrudged it.

"They responded fantastically and you could hear the crowd's reaction.

"The goal certainly gave us a huge lift to go again.

"We were playing against a top side with great ability - they are vying for the title and the Champions League - but we certainly gave them a fight."

Benteke again looked ineffective until putting Villa back into contention with a back-post header.

He then looked a different player and Lambert hopes there is more to come.

He said: "About this time last year he started to hit the goals. It is quite uncanny. It will certainly give him a big lift."

He said: "Holty was fantastic for me at Norwich. He is a proper guy. I have just heard the rumours are everywhere but until something is concrete then I won't say."