Wenger has confidence in Giroud 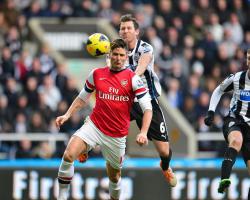 The Gunners will be out to return to the top of the table when they travel to Aston Villa on Monday night after being pushed down into third place following wins for Chelsea and Manchester City at the weekend.

Much has been made of the need for Wenger's squad to bring in some offensive additions during the January window, which has been exacerbated following the season-ending knee injury to England forward Theo Walcott.

However, while the likes of Â£32million-rated Atletico Madrid's Diego Costa have been touted as potential targets, Wenger is in no doubt Giroud - who has missed the last two matches because of injury and illness - can make the difference.

"People want always new names, but what is important for us is that Giroud is back," said Wenger, who has likened the France international's style to the former Arsenal striker Alan Smith.

"He was a bit tired recently, but now he is refreshed and I am sure he will have a major impact on the second part of the season."

The Gunners boss continued: "When you speak to the coaches after the game they say 'oh, what a client he is'.

"Giroud has qualities that the rest of the squad has not got, he always gives us that strength.

"We have small players who combine quickly, so to find someone who can hold it, keep the ball, make some room for other players, he does that very well and gives us a very good balance."

Wenger, though, accepts it is something of a "gamble" to rely on the 11-goal forward lasting the distance.

Giroud had to sit out the New Year's Day game against Cardiff after suffering an ankle injury at Newcastle, where his goal secured a 1-0 win, and then missed the Spurs cup tie after illness.

"He's a tough, tough boy. Even when the medical people say he should rest, he says: 'I'm alright'. He needed five stitches after the game at Newcastle," said Wenger.

"He played the whole game at Newcastle with an open ankle (wound) and without complaining - and when I took him off, he didn't want to come off.

"He is always ready for a fight even when he is tired."

While Walcott's loss is a substantial blow, the emergence of German teenager Serge Gnabry and the return to fitness of England midfielder Alex Oxlade-Chamberlain does at least offer Wenger options on the flanks.

Wenger is confident 18-year-old Gnabry can fulfil his potential for both club and country.

"We are looking at a guy who has good individual talent, he can pass people, is a good finisher, and has a very good football brain with good vision," said Wenger.

"Gnabry has great pace, is two footed, can finish right and left. He has a lot in the locker."